Bahrain – “Only transcendence and fraternity save us”, says Pope Francis before the Muslim Council of the Wise 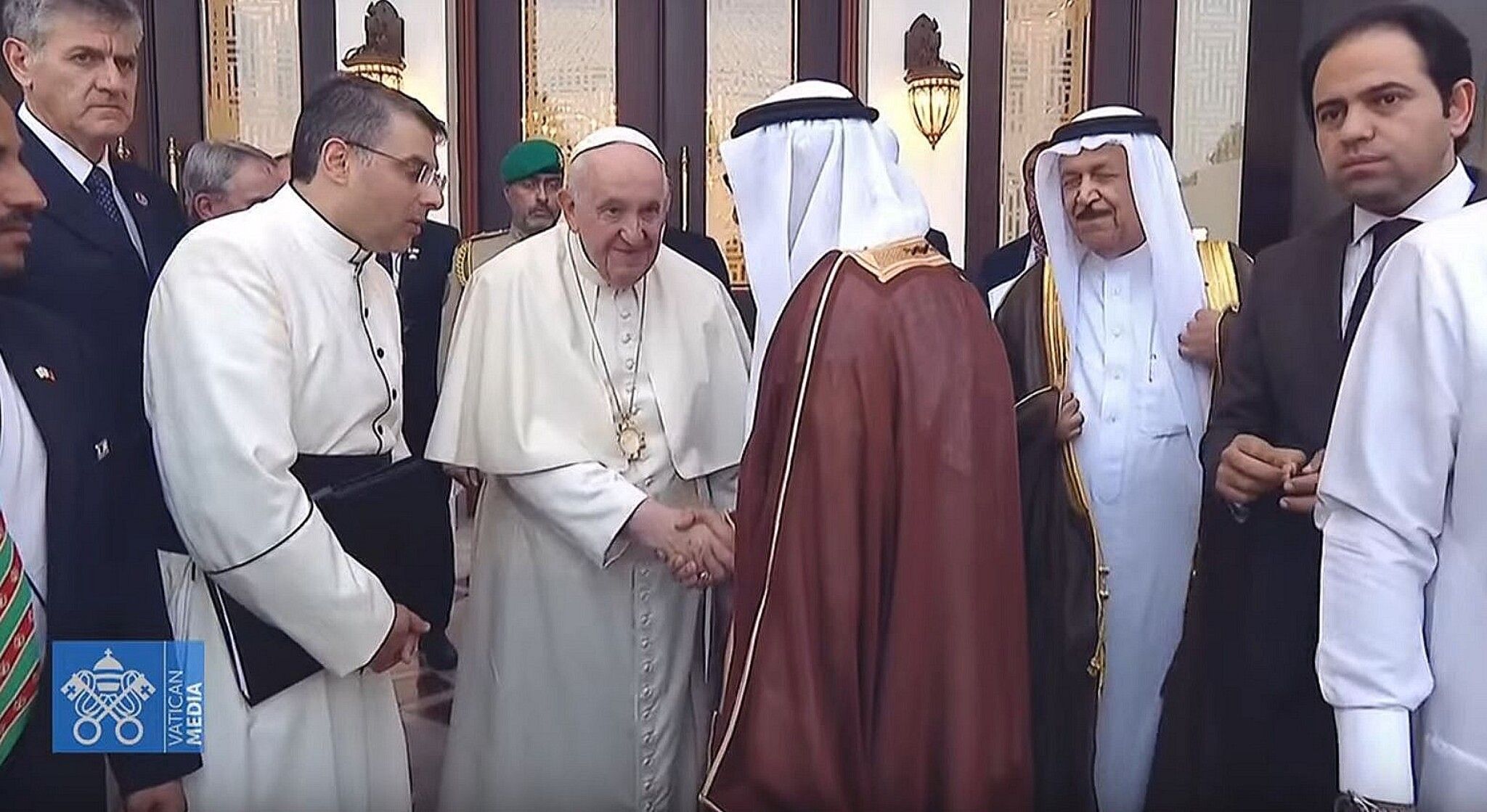 I cordially greet you, hoping that the peace of the Most High descends on each one of you: on you, who wish to promote reconciliation in order to avoid divisions and conflicts in Muslim communities; on you, who see extremism as a danger that corrodes true religion; upon you, who strive to dispel misinterpretations that violently misunderstand, instrumentalize, and damage religious belief. May peace descend and remain upon you, who wish to spread it by inculcating in hearts the values ​​of respect, tolerance and moderation; on you, who seek to encourage friendly relations, mutual respect and reciprocal confidence with all those who, like me, adhere to another religious faith; on you, who want to promote among young people a moral and intellectual education that counteracts all forms of hatred and intolerance. As-salamu alaikum !

God is source of peace. May he grant us to be, everywhere, channels of his peace! Before you, I would like to repeat that the God of peace never leads to war, never incites hatred, never promotes violence. And we, who believe in him, are called to promote peace through instruments of peace, such as encounter, patient negotiations and dialogue, which is the oxygen of living together. Among the objectives that you propose is that of spreading a culture of peace based on justice. I would like to tell you that this is the way, indeed the only way, because peace “is a ‘work of justice’ (1). It is therefore born of fraternity, it grows in the fight against injustice and inequalities, it is built on openness to others » (2). Peace cannot only be proclaimed, but must be rooted. And this is possible by eliminating inequalities and discrimination, which breed instability and hostility.

I thank you for your commitments in this direction, as well as for the welcome you have given me and the words you have spoken. I come to you as a believer in God, as a brother and a pilgrim of peace. I come to you to walk together, in the spirit of Francis of Assisi, who used to say: “the peace that you announce with your mouths, have it even more abundantly in your hearts” (3). I was struck to see how, in these lands, it is customary, when welcoming a guest, not only to shake his hand, but also to put his hand to his heart as a sign of affection. As if to say: your person does not stay away from me, but enters my heart, my life. I too hold my hand to my heart with respectful affection, looking at each of you and blessing the Most High for the possibility of meeting us.

I believe that we need more and more to meet, to get to know each other and to take each other to heart, to put reality before ideas, and people before opinions, openness to Heaven before distances on the Earth: a future of fraternity before a past of hostility, overcoming the prejudices and misunderstandings of history in the name of the One who is the source of Peace. On the other hand, how will the faithful of different religions and cultures be able to coexist, welcome and respect each other if we remain strangers to each other? Let us be guided by the expression of Imam Ali: “People are of two kinds: either they are your brothers in faith, or they are your fellow men in humanity”, and do we feel called to take care of all those whom divine design has placed by our side in the world. We urge “to forget the past and to strive sincerely for mutual understanding, and to protect and promote together, for all men, social justice, moral values, peace and freedom” (4). These are tasks that fall to us, religious leaders: under the gaze of an increasingly wounded and torn humanity which, under cover of globalization, breathes with anguish and fear, I believe that the great must be the heart which unites the members of the body, the soul which gives hope and life to the highest aspirations.

These days I have spoken of the force of life, which resists in the most arid deserts, drawing the water of encounter and peaceful coexistence. Yesterday, I did it inspired by the surprising “tree of life” found here in Bahrain. The biblical account that we have heard places the tree of life at the center of the garden of origins, at the heart of God’s marvelous plan for man, a harmonious plan capable of embracing all of creation. However, human beings have distanced themselves from the Creator and from the order established by him. This is where the problems and imbalances that follow one another in the biblical story come from: quarrels and murders between brothers (cf. Gn 4), disorders and devastation of the environment (cf. Gn 6-9), pride and contrasts in human society (cf. Gn 11)… In short, a deluge of evil and death has sprung from the heart of man, from the evil spark unleashed by that evil which crouches at the door of his heart ( cf Gen 4:7), to burn down the harmonious garden of the world. But all this evil is rooted in the rejection of God and of the brother: in losing sight of the author of life and in no longer recognizing oneself as the guardian of the brothers. This is why the two questions that we have heard are still valid and, beyond the professed credo, they challenge each existence and each era: “Where are you then? (Gn 3:9); ” Where is your brother ? (Gn 4:9).

Dear friends, brothers in Abraham, believers in the one God, the social and international, economic and personal ills, as well as the dramatic environmental crisis that characterizes our time and on which we have reflected here today, stem in the final analysis from our estrangement of God and neighbour. We therefore have a unique and imperative duty, that of helping to rediscover these forgotten sources of life, of bringing humanity back to drink from this ancient wisdom, of bringing the faithful back to the adoration of the God of heaven and to men for which he made the Earth.

How? Our means are essentially two in number: prayer and fraternity. These are our weapons, humble and effective. We must not let ourselves be tempted by other means, by shortcuts unworthy of the Most High, whose name of Peace is insulted by those who believe in the reasons of force, who fuel violence, war and the market for arms, “the trade of death” which, thanks to ever-increasing sums of money, is transforming our common home into a great arsenal. How many dark plots and how many painful contradictions behind all this! Think, for example, of the number of people who are forced to emigrate from their land because of conflicts fueled by the cheap purchase of outdated weaponry, only to be tracked down and pushed back to other frontiers by military equipment. ever more sophisticated. And so hope is killed twice! Well, in the face of these tragic scenarios, as the world pursues the chimeras of force, power and money, we are called to remember, with the wisdom of elders and fathers, that God and neighbor come before everything, that only transcendence and fraternity save us. It is up to us to dig up these sources of life, otherwise the desert of humanity will become more and more arid and deadly. Above all, it is up to us to show, more by actions than by words, that we believe in it. We have a great responsibility before God and before men, and we must be exemplary models of what we preach, not only to our communities and at home – this is no longer enough – but to the unified and globalized world. We, who descend from Abraham, father in the faith of the nations, cannot only have “ours” at heart but, ever more united, we must address ourselves to the whole human community which inhabits the Earth.

Because everyone asks themselves, at least in the secret of their hearts, the same great questions: who is man, why suffering, evil, death, injustice, what is after this life? But with many, anesthetized by practical materialism and crippling consumerism, these same questions linger, while with others they are silenced by the inhuman scourges of hunger and poverty. That our negligence, the scandal of getting involved in something other than the announcement of the God who gives peace to life and of the peace who gives life to men, are not among the reasons for forgetting the ‘essential. Let’s support each other in this, let’s follow up on our meeting today, let’s walk together! We will be blessed by the Most High and by the smallest and weakest creatures whom he prefers: the poor, children and young people who, after so many dark nights, await the dawn of light and peace.

Samsung Galaxy S22 Ultra: this offer signed Amazon will seduce more than one