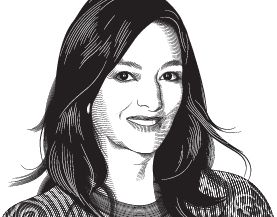 Thirty years ago, I didn’t have an e-mail address, or a mailbox, or even a computer: I had a postal address where people could write to me, it was 5, rue of Chevreuse, in Paris. To send a letter, I took a paper that I had gone to buy in a store, my Montblanc fountain pen offered by my parents for my 18th birthday, in which I had taken care to put blue or black ink cartridges , sometimes purple. Then I wrote, Dear Robert, dear Laurence, dear Mom and Dad, dear Tata Georgette, dear Grandpa and Grandma… It took time to write a letter. It was not a work, it was less than that and it was more than that, because I put my heart into it, in a gesture that was both intimate and universal, important or superficial, whether it was short or be long. Through a message, I was telling a story. Sometimes I erased, sometimes I rewrote to improve the style, to clarify the thought, to formulate more accurately, and also to avoid too many erasures. I tore it up, I started again. Then I took an envelope, I put the address, I stuck on a stamp that I had taken care to buy before. I was going to post it in a mailbox or at the post office, if it had to be weighed before stamping and sending it. She was leaving, she was arriving, more or less quickly, in a distant country, it could take a few weeks. It was not known when the recipient would receive it. The whole process (purchase, write, send) took a few hours.

In these letters, I talked about my life, I gave news, I also asked for it, I evoked my feelings at the time when I was writing, I was able to describe my activities over a day, to tell what what I was doing. I wrote to my friends who had gone on a trip. I wrote to my parents, to my family, to the one I loved. And I remember the joy of receiving a letter, when it is very heavy, swollen under the envelope and there is much to read. The excitement of opening it, without tearing it, and reading it, rereading it, folding it, unfolding it, keeping it, looking at it or burning it. Some letters say love. It is a pleasure to read and reread them. There’s this kind of letter you only get once in a lifetime. Some are sincere, amorous and seductive. Others, full of reproaches and acrimonies. Still others, heralds. There are visionaries and crazy ones. There are some to which we succumb. By a letter, two people distinguish themselves in a form of introspection, in order to be in relation, to remain in contact, to tell themselves that they think of each other, that they miss each other, and this lack takes the form of a letter. It’s strong.

The paper creaks, and to open it, it is as if it were stretching, happy to be unfolded. Even years later when I read them again, I am intrigued and moved. The paper, thick, has resisted, the writing in the fountain pen with the linked letters and a little tilted is still very legible; we detect the effects of passing time, the ink that fades, the hairlines and roundings that fade, we can guess certain words that have become almost illegible. I caress the yellowed paper, I look at it transparently, I smell it, I breathe it, and it’s a whole life that comes back to me. A letter, it’s true, it’s authentic, it’s real.

Today, my beautiful fountain pen sleeps in its case, waiting to be seized. But why send letters? I don’t even know what I would say there: I spend many hours answering emails. I don’t have the time or the inclination to write a letter, I don’t know who to write to, I don’t have the energy to go buy a stamp, an envelope, or to stand in line at the post office, and there are almost no more posts. Why would I go outside to send my missive, when I can write an email, and with one click I can send the message to another email address, instantly? Today, I will not write a letter, and yet, I would like so much to receive some.

From drunkenness to sobriety