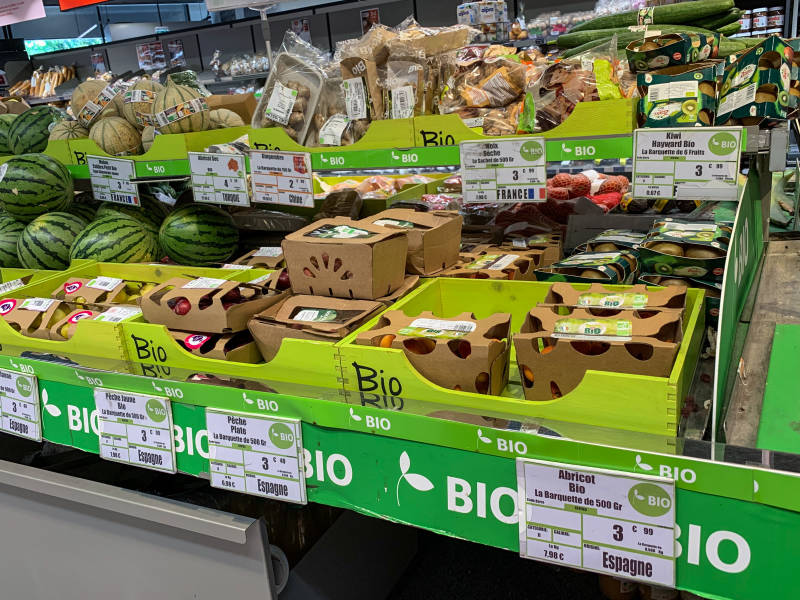 The good years are over. After a decade marked by an increase in the share of organic in agricultural land from 3% to 10% and consumption multiplied by 3.5 between 2010 and 2021, organic is no longer popular in our shopping bags. On the occasion of “European Organic Day”, Laure Verdeau, director of Agence BIO (a public interest group in charge of the development, promotion and structuring of French organic farming, created in 2001), beats the recall.

Agence Bio pointed to a decline in organic consumption of 1.3% in 2021, excluding catering. We know that this decline continued in 2022, but to what extent?

Laura Verdeau. The organic food market is much more fragmented than the food market in general. In organic, large distribution represents only 55% of market share, specialized circuits 27%, and short circuits 11%, against 1% to 2% in food in general. This comes from the fact that one out of two organic farms sells directly. Added to this are crafts: butchers, bakers, greengrocers… who sell, among other things, organic produce. The decline in organic consumption, which we hear about, concerns the first two distribution channels: the 18,000 retail outlets and the 3,000 specialized outlets (Biocoop, Naturalia, etc.). On these channels, in the first half of the year, the decline in food sales in general continued, as did the decline in organic food, in a slightly more pronounced way, with a drop of 9% in supermarkets. But we are starting to see signs of a restart in September. The 2021 figures showed that the other circuits suffered less, even if they did not make it possible to counteract this overall decline. According to our information, organic and local are holding up very well, especially since they are very inexpensive, as are crafts.

How do you explain this decline in organic consumption? Is it a price issue?

There is the price, generally higher than conventional, but this criterion is less and less strong. Our barometer shows that the price drag has fallen from 77% three years ago to 70%. And we can think that it will weigh less and less, insofar as inflation affects organic much less than non-organic, exposed to the increase in the prices of synthetic fertilizers. What’s more, organic farmers and industrialists are smaller structures, which pass smaller increases to distributors, and which are much more contractual, which reduces price increases. In recent weeks, we have seen non-organic products more expensive than organic ones! Or simply present on the shelves, such as mustard and sunflower oil, when they were lacking in supermarkets. This trend is accentuated by the fact that specialized chains have structured themselves and acquired logistical skills that now make them competitive with large retailers. A large specialized brand observed that on a base of 100, average price in supermarkets, out of 80 everyday products, organic is 105%. Never has the gap been so small. Because the prices of conventional have soared, those of organic have fallen due to the peak in milk and egg production, the good climate in the spring… All the benchmarks have been shaken up.

“We withdraw the same amount each week and we see what we have left”: in Le Creusot, life under inflation

Consumption is falling, but production continues to increase. How to deal with this scissor effect?

It’s unprecedented. France has a characteristic in Europe: it produces organic and consumes its production. This is why it is the European leader for organic production and the second consumer market behind Germany. While Italy, Spain, Germany, produce but export. France’s problem so far was that production did not keep up with demand. However, this demand has been very disrupted by the Covid crisis, will be further disrupted by inflation and for the first time, we will no longer have a shortage of organic products. At the very moment when there is a stampede of demand! We are also not helped by pseudo-labels that slice up promises without ever providing organic guarantees. Store owners are delisting organic products and replacing them with so-called “agroecological” references, without any specifications or checks. But organic is the only individual consumption that benefits the collective: when you invest 1 euro, you know that you will have a return on the environmental investment. For example, by reducing the costs of water pollution, by improving biodiversity. And then it’s controlled, with a specification of 300 pages of rules written in black on white. Nothing to do with promises of the “committed breeders” type. Engaged in what?

How did we get to this situation?

France has not equipped itself with the tools to manage demand as much as it manages supply. Agence BIO has 13 million euros to finance organic entrepreneurs, we have tax credits, the CAP, etc. But it has nothing to stimulate demand: to explain to citizens what organic is, how they can eat it for cheap. One of the barriers to buying organic is lack of knowledge: 48% of French people don’t understand why it’s more expensive. During the milk production crisis, the State devoted 20 million euros a year to TV campaigns calling for drinking milk: remember, “dairy products, pure sensations”, “our friends for life”, etc. To deal with the controversies, the product sectors each have tens of millions of euros to promote milk, meat, but organic does not even have one. Ademe has 30 million euros to support the energy transition. The same sums are allocated to the promotion of blood donation. But no organization is responsible for explaining the food transition. And we, at Agence BIO, only have 600,000 euros. How do you want us to change practices and encourage citizens to put a little more organic on their plates every day, to support farmers who are switching to organic? Even the Court of Auditors, in a report published in July 2022estimated that it was necessary to double the number of employees and triple the budget of Agence BIO!

How to stimulate demand?

Every day at 8 p.m., you should be told how to make your food transition: waste less, cook more, cook in season, buy directly, in bulk, vary the proteins, eat legumes twice a week… These messages go beyond the organic/not organic divide. But organic players have a vocation as a spur in this area. See with the bulk: it is the organic circuits that have started to promote it, and the Agec law now imposes 20% of bulk sales area in supermarkets of more than 400 m2. They felt the wind of history before the others and they still do.

Do you think consumers should be helped financially?

For the 10 million French people who are in food insecurity, we would of course need a green check aimed at the 26,000 farms that offer organic and local products, many of them online. What is the use of a check that allows the purchase of products full of fertilizers? In his anti-inflation shield, Michel-Edouard Leclerc has selected 120 products, including M&M’s, Nutella, but only one organic product! Similarly, the fact that distributors are tightening the ranges of organic products in favor of non-organic products is a very bad signal. In England during the 2008 crisis, Tesco and Morrison, believing that there were no more traders to buy their products, removed organic products from the shelves. Result: the organic market in Great Britain is five years behind schedule.

Among the demand development levers, what part can mass catering play?

The EGAlim law imposes 20% organic products in all public restaurants, but we are only at 6%. The tables of the Elysée, the ministries, the National Assembly and the Senate must offer 20% organic! If we reached this level, we would unlock 1.4 million euros in potential turnover for our farmers. We have a huge lever, especially with the canteens that are managed in the town halls, which make cooks work and can give them a taste for their profession through organic products.

There are 176,000 restaurants in France. Kebabs, star restaurants, bistros, which talk about eating well. But how can one claim to make gastronomy with pesticides on the plate? Restaurants respond that if they put organic on the menu, they file for bankruptcy. Which is true if they stick to steak and fries. To remain profitable, meat must be used as a condiment and an art of greening the plates must be developed. It is an avant-garde know-how. But in the kitchen CAP today, over 9 months of training, only 4 hours, at the end of the course, are devoted to official signs of quality, including organic. Today, the integration of organic in restaurants is based on the will of certain chefs, who take the step when they have children, such as Thibaut Spiwack or Sarah Mainguy. We are food illiterates. The Ministries of Education and Agriculture must promote culinary education, so that a student who leaves the parental home does not find himself at the mercy of O’Tacos and Fleury Michon.