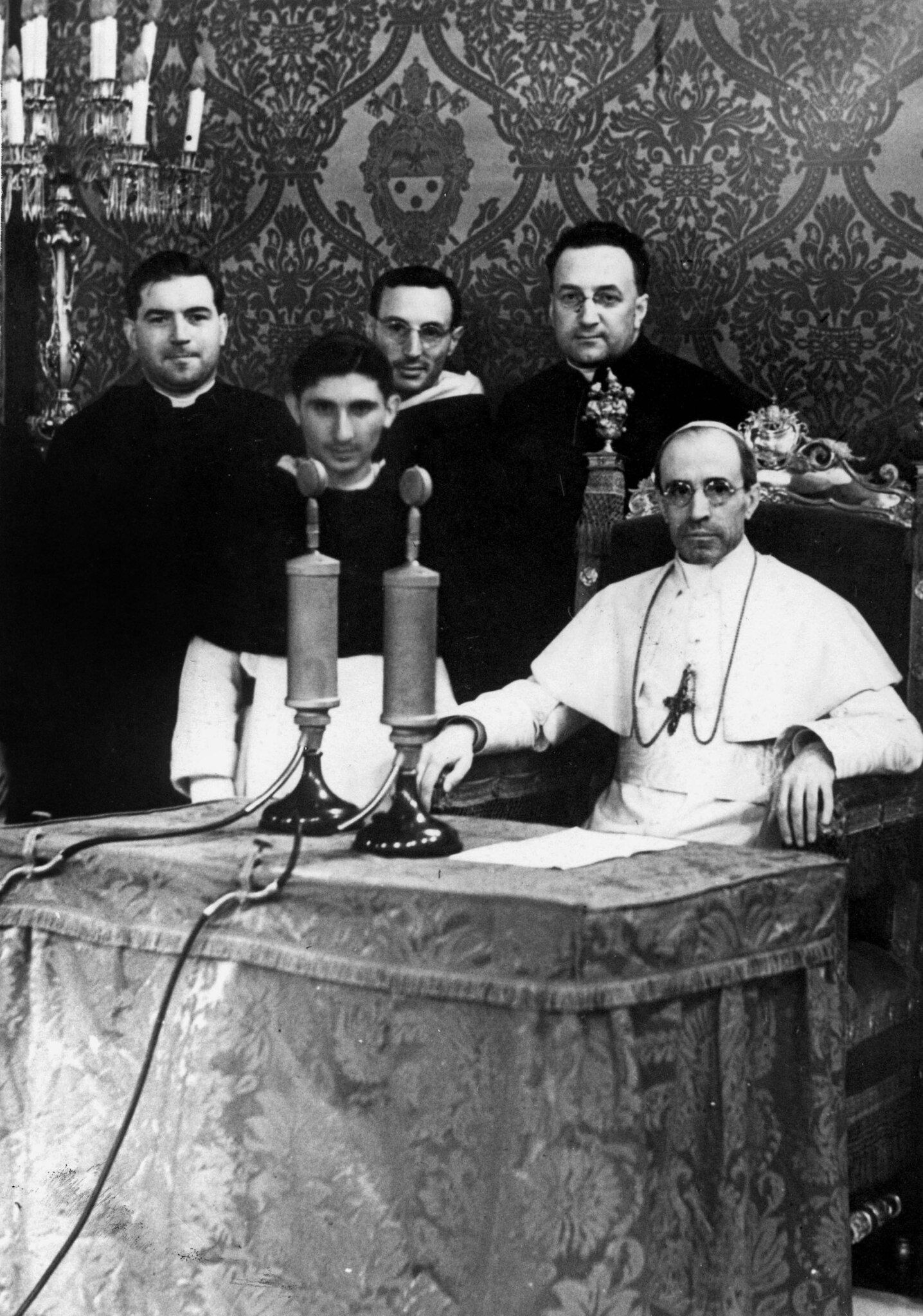 The celebration was grand. More than 10,000 young people, scouts, students, workers, massed on the steps of the cathedral of Le Puy-en-Velay, with their banners and standards, praying to Notre-Dame de France for “to wash away the faults of the French who participated in the decadence of France” Ways of the Cross, barefoot processions, masses, and all this in the presence of no less than eight bishops, including Cardinal Pierre Gerlier, Archbishop of Lyon.

In this month of August 1942, it was not the reading of Bishop Saliège’s letter that held Catholic attention, but much more the wave of pilgrims who, coming from all over the country, invaded the sanctuary for the feast of the Assumption. It has been a long time since we have witnessed such a manifestation of piety, a “great prayer for France”welcomes The Osservatore Romano. The Vichy government is well represented, and broadcasts a message from the marshal, whose voice resounds throughout the esplanade.

When one evokes the letter of resistance of the bishop of Toulouse, one should never forget that, a few days before its reading, part of the prelates endorsed by their presence in Le Puy a gathering with strongly Pétainist accents. Would Mgr Saliège be an exception in an episcopate which was largely misguided in the face of Vichy?

The Le Puy pilgrimage has long symbolized, for historians, the attitude of the French bishops between 1940 and 1945. Jacques Duquesne, in 1966, in French Catholics under the Occupation, thus describes a strong adhesion of the Church to the Marshal’s regime, and a limited interest in the fate of the Jews. This severe judgment is found a few years later with the repentance of the bishops, in Drancy, on September 30, 1997. In front of the old iron wagon, symbol of the deportation, the Church accomplishes a process of purification of memory, with a text read by the Bishop of Seine-Saint-Denis, Mgr Olivier de Berranger. The words are strong: “The vast majority of the spiritual authorities, entangled in loyalty and docility going well beyond traditional obedience to established power, remained confined to an attitude of conformity, prudence and abstention”proclaims the text, which concludes: “Silence has been the rule, and words in favor of the victims the exception. »« Silence »the term is not used at random.

At the time, already, some half-words regretted this severity. And, for several years, historians have endeavored to rehabilitate the action of the bishops, explaining that the repentance of Drancy does not take into account all the rescues of Jews under the aegis of the dioceses. Have we really established an excessive “black legend” on the role of the Church under Vichy? What was at stake, during this whole period, between the Church and the Jews? The question is sensitive, and decisive for my investigation of Saliège.

When in doubt, I decided to turn to an indisputable historian of Catholicism, to understand these changes in judgment: Étienne Fouilloux, now a retired professor, settled in Lille after having pursued a university career in Lyon. Having met him in the past on several occasions, I have always been impressed by the capacity for hindsight of this researcher, a convinced Christian. I was not mistaken: for a whole morning, this man of over 80 will enlighten me with the incredible precision that characterizes him on the Church under the years of Occupation.

Was Saliège an exception? A distinction must be made, he explains, between support for Pétain, behind which the entire episcopate sided, and the reaction to the deportations of Jews. On the first point, the bishops are for their majority of veterans of 14-18. The marshal is the providential man, whose diagnosis on France they share: “Work, family, country, these three words are ours”said Cardinal Gerlier, in Lyon, in 1940. This loyalty will be persistent, as shown by the obstinacy of Cardinal Liénart (Lille) to testify in favor of the marshal during his trial in 1945.

But, precisely, because they have Pétain’s ear, couldn’t the bishops have used this rediscovered magisterium – the Third Republic was tough on the Church – to defend the Jews? In 1942, only five of them protested. On a little less than a hundred, it is not much. And yet, the archives are formal, these public positions had a real influence on the anti-Jewish policy of the government.

In 1945, it was this proximity to Vichy that they were blamed for, notes Étienne Fouilloux. The leaders of the Church are not Gaullists and the General holds it against them. Moreover, the episcopate is confronted with the criticisms of the Christians who entered the Resistance. They did it in the name of their conscience. They knew how to adopt the right ethical attitude, showing that the the sense of faith of the faithful (the faithful’s sense of faith) is sometimes more just than that of the hierarchy…

Moreover, the post-war period marked the great return of Catholics to politics, former resistance fighters like Georges Bidault or Maurice Schumann, who were not the least severe towards the institution. The Touvier affair, which broke out a few years later, reinforced this impression: the support enjoyed by this former collaborationist proved that everyone in the hierarchy was definitely not yet ready to recognize the errors of the past… But the affair also caused an electric shock with the establishment of a commission, in 1989, under the aegis of the historian René Rémond, responsible for clarifying the complacency of the Church vis-à-vis Vichy.

This context will logically lead to the repentance of the bishops, under the impetus of a new generation of prelates – Decourtray, Lustiger, de Berranger – concerned, after Vatican II, for a Church more attentive to the world, and not solely for the defense of its interests. Drancy’s speech is basically only the parallel, on the Church side, of Jacques Chirac’s 1995 approach, with the declaration of the Vel’ d’Hiv. He too calls into question the institutional responsibility of the French State. Undoubtedly, by gradually discovering the scale of the Shoah, its unimaginable character, it was necessary to go to the bottom of “this duty of memory”, to focus on the 7,500 Jews of France who never returned from the extermination camps. Added to this is the work of an American historian like Robert Paxton, showing how the Vichy regime got involved in the “final solution”. But this very critical vision – and exact as for the role of Vichy – does not take into consideration the public opinion. Nor the resistance that has arisen, in a thousand and one ways, and without necessarily taking up arms, within the population.

Historian Jacques Semelin today embodies this more complex approach. Is it because he is stricken with progressive blindness which forces him to work essentially from hearing? In any case, this conflict specialist is particularly attentive to “weak signals”, these gestures of solidarity, of humanity, which mean that knowledge of the great facts of history alone is not enough for its interpretation. No, France was not a country of 40 million employees. Or 40 million resistance fighters… Jacques Semelin endeavors to dissect these multitudes of networks, informal aid, these “micro-networks” which have remained anonymous (1).

Among them, he explains, the role of the Churches, Catholic and Protestant, has been essential. An action that owes a lot to “grassroots Catholics”, priests, nuns, mothers and intellectuals. Jacques Semelin’s book, and its chapter on the Church, looks like a rehabilitation: from the play The vicar by Rolf Hochhuth, the Church is an easy target for sweeping caricatures. As shown in the remarkable exhibition “By the grace of God”. The Churches and the Shoah”, at the Shoah Memorial in Paris (2), if only five bishops protested, many covered, at least tacitly, lifelines in their diocese.

What to conclude? The French bishops were not permeable to Nazi theses on race. On the other hand, the “Jewish question”, as they called it, was never considered by the majority as a priority that could have motivated a frontal attack by Vichy. This relative indifference explains why the institution went from complacent silence to a charitable and moral reaction to the deportation. Remains, and this is indeed the question posed by the repentance of Drancy, this « silence ». Bishops acted for the Jews, made them act, let them act. But few spoke. From this point of view, Bishop Saliège is indeed an exception. But, after all, is it the role of a bishop to speak? Isn’t his first duty to protect his flock? This is the question of the last part of this series.

A theater with a thousand stories