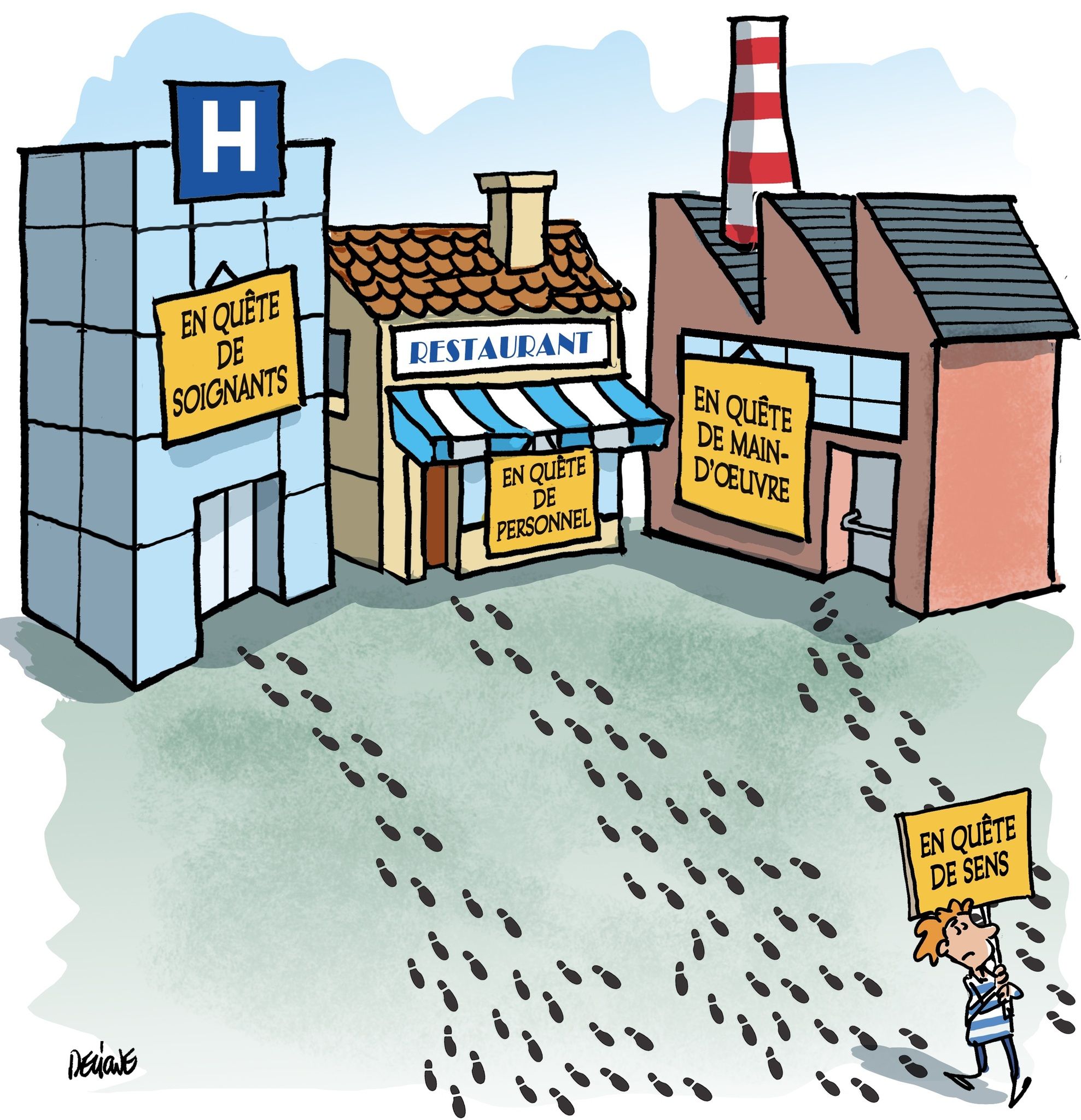 182,290 vacancies in personal services, 143,860 in trade and mass distribution, 139,370 in hotels and restaurants, almost as many in industry, construction, transport… In the first quarter of 2022, more one million job vacancies were identified by Pôle emploi, against a stock usually hovering around 700,000. Beyond the classic gap due to the mismatch between the job offer, the and qualifications, these figures make employers dizzy and raise questions: where have the employees gone?

If it is dangerous to find the trace of employees who are missing in these sectors, one thing is certain: these individuals have not withdrawn from the labor market since the employment rate of 15-64 year olds is at its highest level since INSEE measured it. It is therefore impossible to speak in France of a “great resignation”, like the one experienced in the United States, where a third of the total working population left their job in 2021, i.e. 48 million Americans. Observers prefer the term “great turnover” to characterize the 470,000 people who left their CDI in the first quarter of 2022, according to Dares, the statistics service of the Ministry of Labor.

“The difficulty of the current situation is linked to the multiplicity of factors at the origin of this tension on the job market”, reports Franck Ribuot, president of the Randstad France Group, the world leader in temporary work. He mentioned in particular the explosion of apprenticeship, which now concerns 800,000 young people less likely to hold seasonal or evening and weekend jobs, early retirement, but also “contractual ruptures which give rise to periods of reflection, training, even retraining”.

The conventional break, Wendy Serrat resorted to it at the end of 2019, after having worked six years as a cleaning agent on airliners at Marseille-Provence airport. “Staggered schedules, on-call duty on weekends and public holidays, the situation had become unbearable”, breathes the young mother. “We were never paid for overtime: the managers compensated us by giving us a few hours off at the airport between two flights. My salary was only used to pay the childminder,” remembers the one who now occupies a position of administrative assistant in a chemical company, still in the Bouches-du-Rhône. She doesn’t earn any better than before, but enjoys weekends with her daughter and the benefits of a works council, as well as quarterly bonuses.

His case is far from isolated. Christine Ehrel, director of the Center for Employment and Labor Studies at Cnam, points out “the problems of attractiveness of certain sectors such as hotels and restaurants, maintenance and cleaning and medico-social, which offer working conditions that are too difficult for wages that are too low”. Atypical or unpredictable hours, unpaid waiting times… So many constraints that encroach on personal life and are “all the less well tolerated as employees see no career prospects”, specifies the economist, co-author of a report on the recognition and upgrading of so-called “second line” professions (cashiers, cleaners, home helpers, etc.).

« Today, recognition is at least as much a question of employees’ “power to act” in their work as it is of money. They no longer want to be treated as pawns, they aspire to develop their skills, including in jobs that are a priori unskilled,” agrees his colleague Thomas Coutrot, former head of the “working conditions and health” department of Dares and co-author of Bringing meaning back to work. A revolutionary aspiration.

A narrowing of the prospects that Raphaël Bach suffered during ten years spent in the large discount distribution in Toulouse: “When I arrived, at the end of my BTS, we had bonuses to get goals. People stayed with the company for a long time, which made it possible to know everyone. » Promoted to store manager, he had the feeling of becoming “a key ring with opening hours 7 days a week”. “Despite my know-how and my status as a director, I was made to feel that I was interchangeable. In the long run, my only skyline had become my payslip,” says the forties, who embarked on a new adventure at the end of the health crisis: viticulture, on a family estate in the Lot.

The loss of meaning at work is undoubtedly one of the variables that play the most on the quit rate, according to economist Thomas Coutrot: “For the employees, it is a question of being able to deploy their energy without being hindered by an overly rigid organization, quantified objectives, endless procedures. »

A crisis of meaning that occurs earlier and earlier, for example among nurses: 30% of them leave the profession within five years of graduation, according to the National Union of Nursing Professionals. At 22, Anniela Garon gave up after four years of study for fear of being “this burnt-out nurse who would have exhausted herself trying to plug the breaches in a bloodless health system”. The salary increases allowed by the Ségur de la santé did not deter her from leaving the hospital sector.

The young woman recorded the reasons for her choice in a letter: “As soon as we start our studies, it is precariousness that we encounter with low and late internship allowances. From the beginning, we are in the wrong, in the lack of consideration, in the impossibility of truly treating and caring. » In the hope of “find a purpose” Anniela plans to move towards associative solidarity at the start of the next school year.

Failing to bring out the “next world”, the aftermath of the health crisis thus augurs a new relationship to work in which resignation has again become an option for suffering employees, in a dynamic labor market and where the relationship by force is being rebalanced between employer and employee. Hirings on permanent contracts increased by 18.5% in the first quarter of 2022 compared to the pre-crisis level.