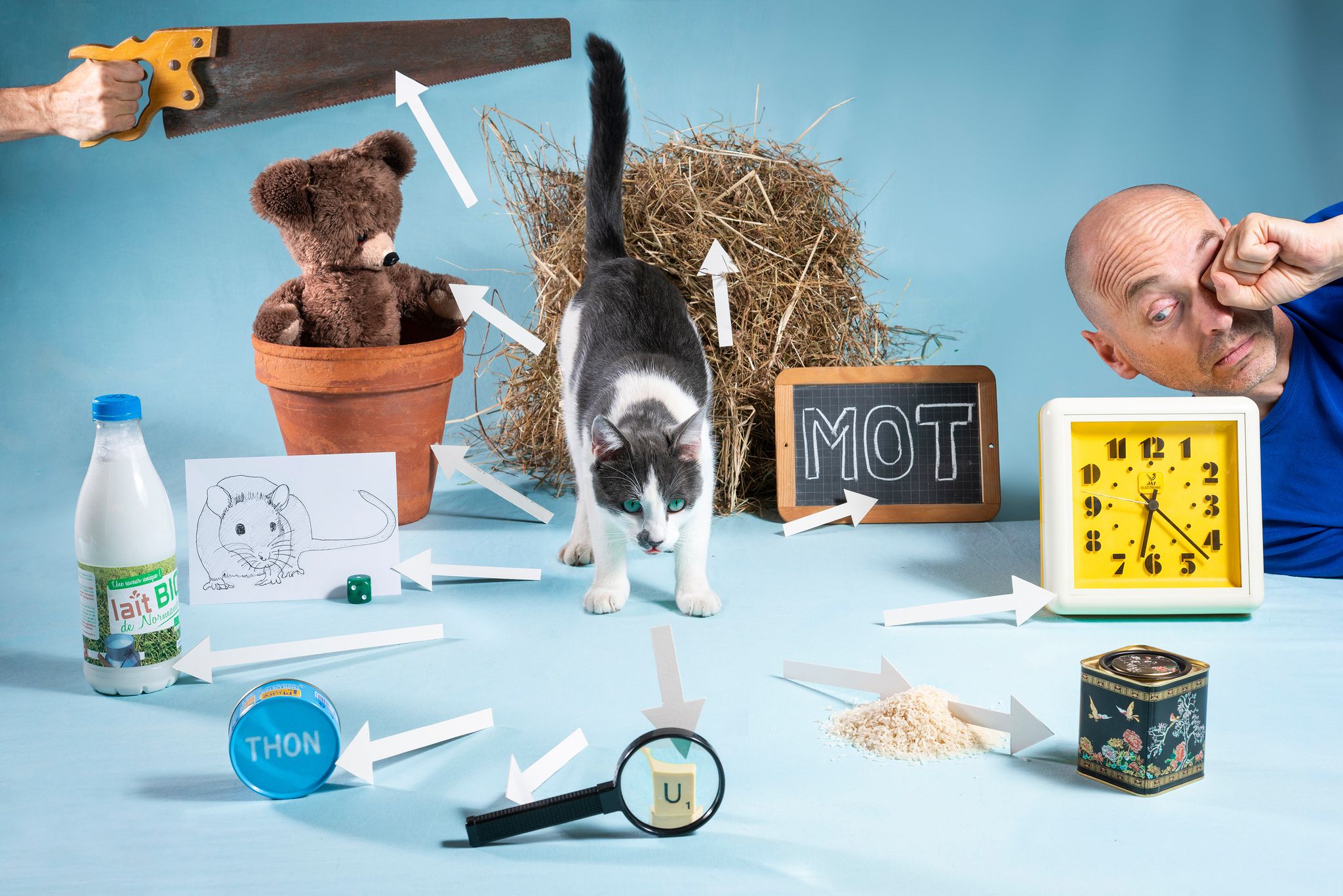 ♦ Contrario or the story of “Foosball the shark”

The first message arrived during one of the multiple confinements, on the discussion group where the friends organize evenings of board games. “We are looking for a footballer… Jospin Jesus”. A cryptic code? Somehow. It’s about finding expressions, proper nouns or names of works by giving synonyms and opposites that form a new wacky but understandable expression.

“Jospin Jesus” never touched the ball, but another Lionel can be considered the “Messi(e)” of football. Easier, “Babyfoot the Shark” brings back memories of the small screen and of a happy dolphin named after an endangered PMU machine… The coded messages follow one another, each more disturbing than the previous one. Blame it on Contrario.

The card game contains more than 1,000 expressions thus diverted, with clues when the participants dry up. Because yes, no matter how much we tweak our brains, it is not always easy to find the original! At least two crates of fruits and vegetables were sifted through to try and figure out what “a soul of asparagus” was referring to, but “a peach body” or “a potato spirit” didn’t really seem like good choices. answers. “It has to do with love…” slips the impatient who has the right answer. Finally, the flash of genius: An artichoke heart! “. Easy to play remotely, in the evening, on the beach, on a hike, Contrario is all-terrain and guarantees giggles. Or rather the wise sobs.

How to draw a face when you have the right to only two lines? How to understand the difference between the sun and a beacon when curves are prohibited? For all those who want to renew the challenges of Pictionary, the alternative is called Kontour.

The principle is the same: cards with words to be guessed by drawing, in a given time. But Kontour strongly limits the creative process with a maximum of 15 strokes and the ban on making circles and other curves. Here the cubist painters took over. Everything must be straight, geometric, counted. The smallest apple is therefore represented as a square and already costs 4 lines! Imagination proves to be as decisive as artistic talent, both for those who draw and for those who guess.

Especially since the fine white sand flows quickly, very quickly. With barely thirty seconds to distinguish a carton of milk or an umbrella, it is a question of not procrastinating. There is one on which the fateful hourglass has no hold: the youngest of the group, who from the top of her eight years wants to polish her masterpiece: “Wait, I’m not done!” “But the time is up and you already have way more than 15 traits.” “But it’s not graaaaave.” » Difficult to deny, it is actually not very serious if you overflow a little. Moreover, the points have not been counted for a long time, each one feeling only the ephemeral and quickly forgotten pride of having guessed the word, before one drawing chases the other. After all, it’s just a game!

♦ In Skyjo, take advantage of the caution of others

The cards are colored and numbered… but it’s not a Uno. The Skyjo is all the rage in a religious community, discovered in favor of a confinement which has curbed their apostolates in the evening. Its virtue: the accessibility of the rules, ideal for the rapid integration of players for whom fluency in French is not essential.

Skyjo is practiced with two to eight players. That evening there were five religious around the table. Each of them, at the start, has four columns of three cards, with ten cards face down. The turns follow one another. When the first player has returned all his cards, the player wins the round whose sum of cards (numbered from -2 to 12) represents the lowest total.

The temperaments, oscillating between caution and excessive audacity, are revealed during the games. When his turn comes, the player can draw a card and decide, either to put it in the place of one of his own, or to reject it directly. In this case, he is obliged to uncover one of his cards face down. He may also not draw and instead pick up the card the player before has just discarded. An option not to be overlooked, especially if it is a “0”, or even a “-2″… To spice up the game, a column of three cards with the same number is removed. Collecting “12s”, especially if they scare off the previous player, then pays off.

Obviously, the luck factor is not negligible. But beware ! Strategy matters too. In the community, the former math teacher quickly won the laurels.

Afghanistan: eight dead in an attack in Kabul claimed by Daesh