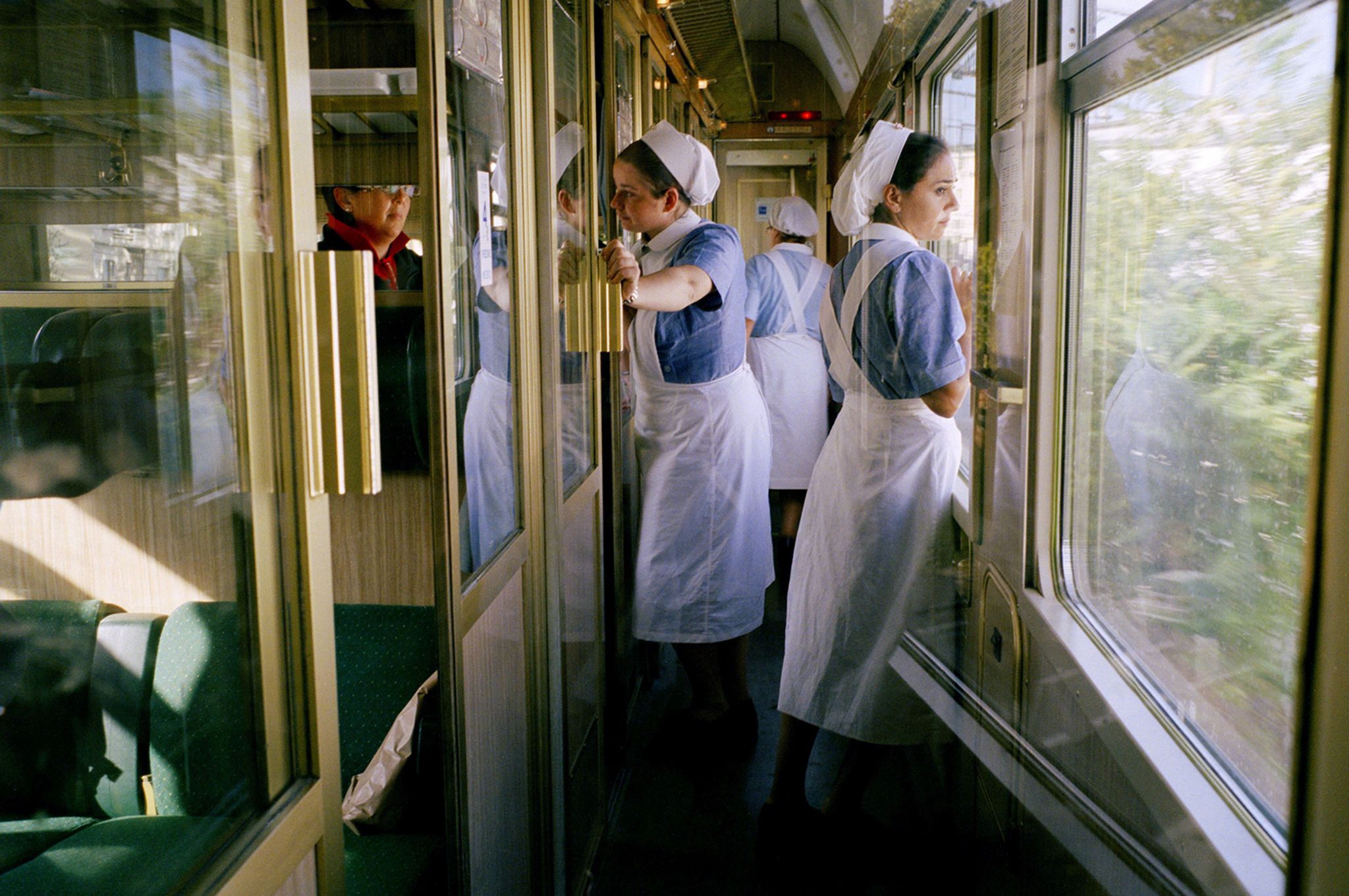 In pajamas and nightgowns, elected officials and residents descended on the platforms of Lourdes station one night in March 2017, determined to be heard. In this region where migratory birds are expected at the corner of the wood, they demanded, loudly, that the Blue Wood Pigeon be preserved. This night train, linking Paris to Lourdes since 1979, served as an umbilical cord for exiles from Béarn. Many jumped into the one on Friday evening and came back up on Sunday evening. But three months later, the accounting rigor of the SNCF withdrew this train which had, it seems, prestige only in the eyes of those who borrowed it. “The Blue Pigeon, it has been idealized, mythified”, acknowledges local historian Jean Omnès. “As we are at the end of the world, it ensured an emotional link with the capital. »

This protest and the invigorating action of the very active collective Yes to the night train!, which surfs on the revival in Europe of this mode of transport too long relegated to oblivion, got the better of the bureaucratic stubbornness. The Blue Pigeon resumed its flight at the end of 2021, but without fanfare, with old Corail barely refitted. Like a sort of grudging concession. Just an old-fashioned water point, an antique sink in the shabby toilets, a survival restoration, and above all a change of course that remains in the hearts of those who campaigned for its rehabilitation. Instead of returning to Dax and Bordeaux, the Blue Palombe passes through Toulouse to complete its eleven-hour night journey. At least we can rejoice to see that the Paris-Orléans-Limoges-Toulouse (Polt) line thus regains a bit of appeal (read previous episode).

In the early morning, after having skirted, barely awake, the still snow-capped peaks of the Pyrenees, a disproportionate tangle jumps out at the entrance to Lourdes. Flanked by a chapel and a reception pavilion for the sick, the station has 34 tracks! We are faced with a historical reality. Pilgrim trains have structured this medium-sized city. Stuck at the edge of its Gave, benefiting under Napoleon III from a railway diversion between Tarbes and Pau, it had to absorb and regulate the incessant convoys from all over Europe. They certainly did not break speed records but at least they were considered a priority.

Less than a decade after the first apparitions of the Virgin to Bernadette (1858), Father Laparade, from Bayonne, “invented”, from the Basque Country, the pilgrimage train. Lourdes station has just been inaugurated. The flow is not going to dry up. “Pope Pius IX will decorate the station master with the Order of Saint Sylvester, which rewards civil merits. Observer of this great processionary rush on rails, Émile Zola, in Lourdesdescribes, from the inside, the pious atmosphere and the meticulous logistics », recalls Jean Labourie, former archivist of the city, in charge of research at the Pyrenean Museum. In 1908, for the year of the fiftieth anniversary of the apparitions, 525 trains brought 400,000 pilgrims. For the centenary, in 1958, the station received 1,780,000 passengers, arriving by special and commercial trains.

The figures are always subject to caution, but not the density of hotels and family pensions as far as the eye can see, nearly 400, which then propelled Lourdes, with its 13,000 rooms and 35,000 beds, to second place in terms of hotel capacity. accomodation, after Paris, at the same level as Nice, underlines Pascale Fourticq, the enthusiastic director of the tourist office.

In the 1970s, we are talking about 6 million pilgrims, 800 special trains, up to 40 a day. “It didn’t stop! » sighs Pierre Barrère, the director of the travel agency, La Maison dupilgrim. “All the dioceses came by train”, explains Marie Etcheverry, communications manager for the Notre-Dame de Lourdes sanctuary. In the organization chart of the SNCF, there was even a Pilgrimages sub-directorate.

To channel this crowd, long assailed on getting off the train by beggars of all kinds whose harassment could turn into a rat race, a boulevard was opened which led directly from the station to the Grotto and the basilica, without passing by the city center, to the chagrin of traders. “A new twist in a series of quarrels settled with Ottoman subtleties, says Jean Labourie. Originally, the Compagnie du Midi had planned to circumvent the city to arrive at the sanctuary. But, faced with the hostility of carriers and traders, the municipality was opposed to this project. »

Pilgrim trains follow a very specific protocol, with compulsory doctors, nurses, voluntary nursing staff. “The train is the beginning of the pilgrimage and a great school of humanity”, emphasizes Hervé Brachet, former manager of the Hospitality of Notre-Dame du Salut. Rented a year in advance, their installation is governed by a quasi-military organization. “For a departure at 10 p.m., we started in the morning to gather all the necessary supplies (mattresses, sheets, covers, pillows, blankets, canteens). At the beginning of the afternoon, the cars were equipped with wooden planks superimposed across the berths to accommodate three patients per compartment.explains Hubert du Plessis, stretcher-bearer and head of the National Pilgrimage to Lourdes, organized by the Assumption.

« For the most serious cases, there were also ambulance cars, old military carsexplains Hervé Brachet. It could accommodate about forty patients. The elevator teams carried the stretchers up through the windows, a delicate operation which required strength to hoist them up and skill to receive them. The corridors were narrow and the passage difficult. It took two hours to install all the travelers and companions. And four hours in Lourdes to bring down the sick, tired by the journey, and all the equipment, before heading to the grotto. » Impressive ballet, in the midst of incessant arrivals of convoys subject to the same constraints.

Unlike ordinary trains, a sound system provides the atmosphere, with music, songs, prayers, rosaries, masses, practical information, testimonies, spiritual animation. “It is an essential component of these trips”, assures Hervé Brachet. Moreover, the pilgrim trains are the only ones where a civilian who is not sworn by the SNCF has the right to take the microphone en route.

Since 1965, Sister Thérèse, Little Sister of the Assumption, has been to Lourdes fifty-two times as a nurse. “We were still taking on sick people along the way, at Aubrais and Tours. In the middle of the convoy was a large van, the rear base for medical and paramedical equipment, luggage, wheelchairs, food warmers. We stored the equivalent of four hundred meals. The water supply was in jugs that we hastened to fill in Tours. In Bordeaux Saint-Jean, in the middle of the night, the station buffet opened for us. We took water and ice. From departure to arrival, we had no time to sleep. It was constant attention, giving care, comforting, accompanying. We came out shattered with fatigue. In Lourdes, there is no question of resting. The pace was also hard for the pilgrims. » Tonic, Sister Thérèse lets go: “A patient in Lourdes must be in great health, believe me! »

Impatient to reach the Grotto, the pilgrims disembark in a mixture of anguish and hope, “either to heal or to die in the arms of the Blessed Virgin”summarizes Hervé Brachet.“For them, going to the station is one step too many, always too long, observe Hubert du Plessis. When it was time to leave, we tried to reduce their waiting time as much as possible. We sensed that they were in the throes of disappointment and resignation. This wasted time tore them away from the sanctuary, from those last moments that they would so much have liked to prolong with a prayer, an ultimate hope. »

Parting with a family home… or keeping it?

Parting with a family home… or keeping it?