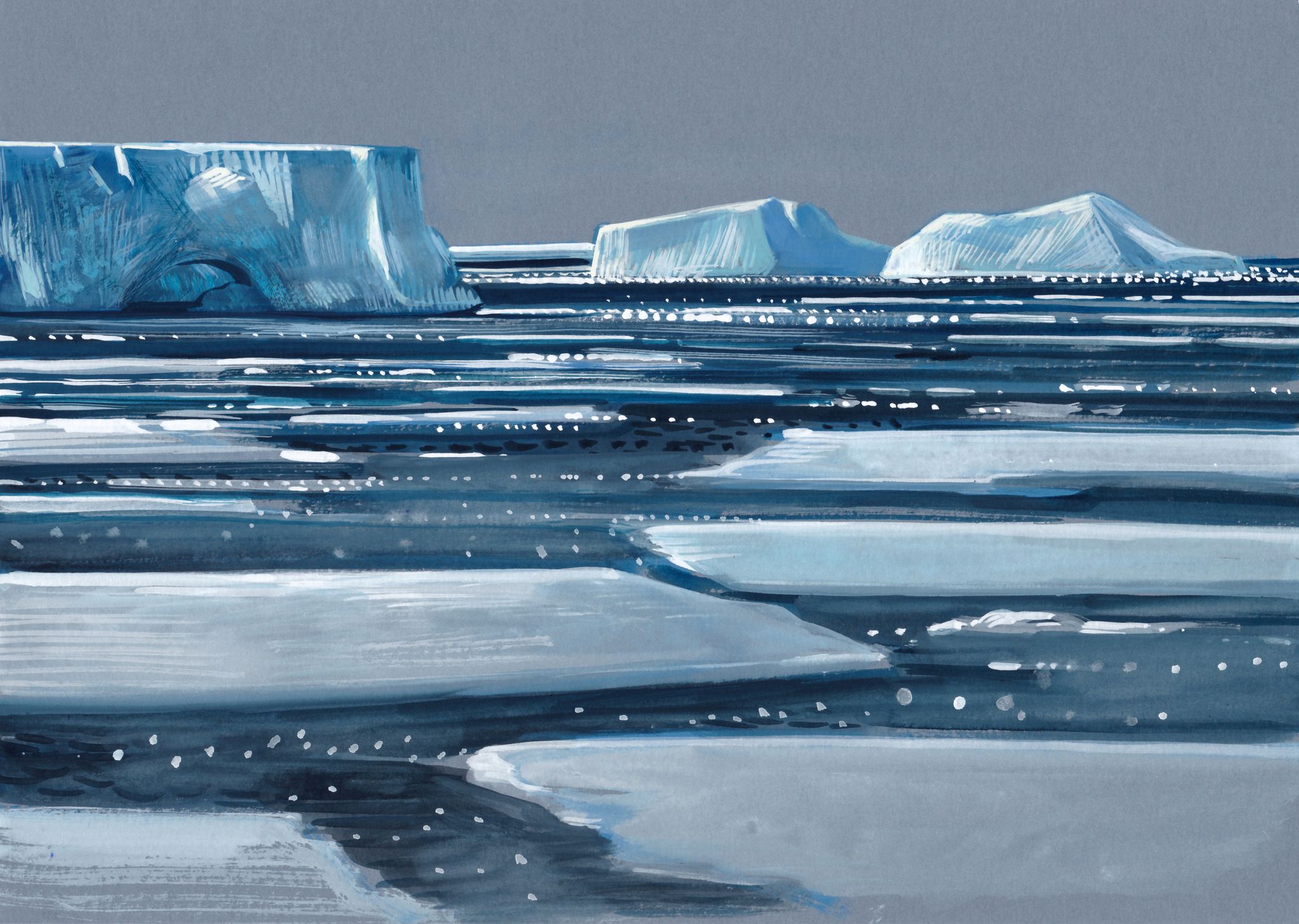 The French scientific base Dumont-d’Urville is located in Antarctica, on the east coast of Adelie Land at the South Pole. The polar patrol vessel L’Astrolabe, which leaves Tasmania to reach it, is demilitarized during its rotations in this area: it transports equipment for the two bases in the region (Dumont-d’Urville and Concordia) as well as ” special passengers”: researchers, scientists, geologists, technicians… and painters.

A stone’s throw from the Dumont-d’Urville base, aboard the polar patrol vessel L’Astrolabe.

“After crossing the roaring forties, the howling fiftieths and the roaring sixtieths, here I am in the padded torpor of the Arctic Circle. No doubt, Antarctica is worth it. »

“As soon as I got off the plane, I knew I had two weeks to design my hotel-prison. This is the duration of the strict quarantine imposed by the “Antarctic bubble”. “The first thing I see when I wake up: the cage! Our only space of “freedom” of the day. You have to call early in the morning to benefit from a thirty-minute outing in this space in full sun: thirty-four paces long by five wide. »

“Of the fauna of Tasmania I know only the incessant “tilup” of the walkie-talkies of our jailers who tirelessly pass under our windows, day and night. Funny birds. To pass the time I try to watch television but I only catch lucha libre matches (Mexican wrestling, editor’s note). »

” Miracle ! A few days before our release, one of the group’s scientists sends us via WhatsApp a photo of freedom: from his room he was able to photograph L’Astrolabe, anchored in Hobart Bay. Soon we will have left the penitentiary and we will be on board!

Before beginning its long descent towards the South, the polar patrol boat is full for seven hours. The gas station is guarded by a Mexican, who has come here God knows how. »

“It’s docked, blazing red. L’Astrolabe. We finally embark for the Great South to carry out our mission: supply the base and carry out scientific research. I am one of the “special passengers” and I have to follow the safety briefing: it is forbidden to fall into the sea!

My first gouache is about the huge orange containers on the rear shelf. While I paint, strange “gongs” seem to escape from it. Could the bosun have left a sling lying around that follows the movements of the roll? »

“After several days at sea, here I am at last on the legendary Dumont-d’Urville base, the only French station located in Antarctica. Barely landed I am impressed by the dilapidated equipment and the incalculable number of cans, tanks, reservoirs, canteens, boxes and crates lying around everywhere. The long unloading work has begun. A box escaped and nearly ran over a docker. What evil spirit hides inside? »

“I take advantage of the newfound freedom to explore my playground. As the discoveries progress, I tell myself that the polar adventure begins with the container… and the slippers that we received in our extreme cold pack.

“The long parade of icebergs plunges me into an almost ecstatic torpor and I flee the human race.

I’m sitting on a rock that’s billions of years old.

I feel its telluric power. »

“Only the cackling of the penguins and the incessant rotations of the helicopter come to break the tranquility of this icy Valhalla. In the distance, yelps sound from the storage area. A wounded bird? »

“I know I’m going to leave soon, I have to leave these crazy mountains. A curious feeling envelopes me, a diffuse anguish. »

“And still the mystery of these containers. What are they hiding? A few days ago, by coring, geologists found very old remains, organisms resistant in an almost supernatural way to extreme temperatures. »

“I turn around and, for a moment, dazzled by the whiteness of the ice around me, I think I see the masked face of a fighter ice-creams. Was it he, the Red Sphinx, who was hidden in the container? »