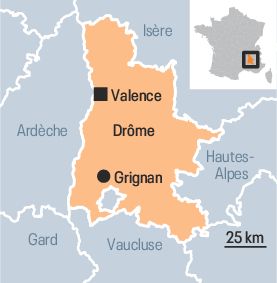 Madame de Sévigné compared this ship surrounded by an ocean of lavender to the « kingdom of Micomicona», pursued in her dreams by Don Quixote. She did not like this land which had taken her daughter Françoise-Marguerite from her in 1671 after her husband, Count François de Grignan, had been appointed Governor of Provence by Louis XIV. It was there, however, following a cold snap, that she ended her days on April 17, 1696. Today, the marquise sits proudly near the fountain at the foot of the ramparts: period hairstyle, the oddball, and pen in hand, in a statue erected in 1857.

This writer, considered one of the greatest literary figures of the 17the century, published nothing during his lifetime and only rose to prominence after his death when his granddaughter Pauline decided to publish his letters in the 1720s. expand and well beyond the French borders. Across the Channel, Virginia Woolf will not stop praising this woman who – like her – writes, and many English people stop in Grignan to follow in the footsteps of Madame de Sévigné.

At the end of the XVIIe, it took at least three weeks of diligence to go down from the capital to the Drôme. The Marquise made the trip three times in twenty-five years and stayed in Grignan from July 1672 to October 1673, from October 1690 to December 1691 and finally from May 1694, for the wedding of her granddaughter Pauline, until her died in April 1696, at the age of 70. The rest of the time, during their long periods of separation, she wrote nearly 800 letters to her daughter, the great love of her life.

Today’s Grignan, admirably preserved, partly resembles that known to Madame de Sévigné, its cobbled streets winding in a spiral around the castle. The building, which dominates the valley facing the legendary Ventoux, is in itself a journey through time. Initially a defense castle, its first foundations date back to 1035. Its splendid Renaissance-style facade actually includes a 12th century keep.e century, a 12th century towere to the west and another from the XIVe to the East. The huge terrace runs to above the sumptuous Collegiate Church, which the walker can access from the village. In her letters, Madame de Sévigné advised her daughter not to go there to pray, for fear that the humidity that seeped into the roof terrace would cause it to collapse.

Sold by Pauline in 1732, the castle was then dismantled during the Revolution. Passed through the hands of several owners, Grignan was bought in 1912 by Marie Fontaine, a wealthy widow from Pas-de-Calais, who opened it to the public and undertook to restore it to its former glory. Now the property of the department, the castle attempts to take visitors back to the time of the splendor experienced by Madame de Sévigné, with this “duchess” bed, similar to the one in which she breathed her last, this incredible ebony cabinet, identical to those owned by Count François, or even this grandiose Adhémar gallery, whose luster has nothing to envy to its Versailles cousin. Just imagine the beautiful toilets and the parties in full swing.

Each spring, the whole village takes on an enchanting adornment: bouquets of colors and scents formed by some 400 roses of 150 old varieties scattered throughout the village. Climbers, bushes, with large spines or small foliage… Botanical village since 1991, Grignan is a veritable open-air conservatory. With, of course, among its treasures, the “Madame de Sévigné” rose, created by the breeder Moreau-Robert in 1874. A bourbon rose with a lively and generous crimson, like the pen of its illustrious inspiration.

The dahlia, a real diva