“The Nest of Ashes” at the Avignon Festival: a magical odyssey in the heart of the theater 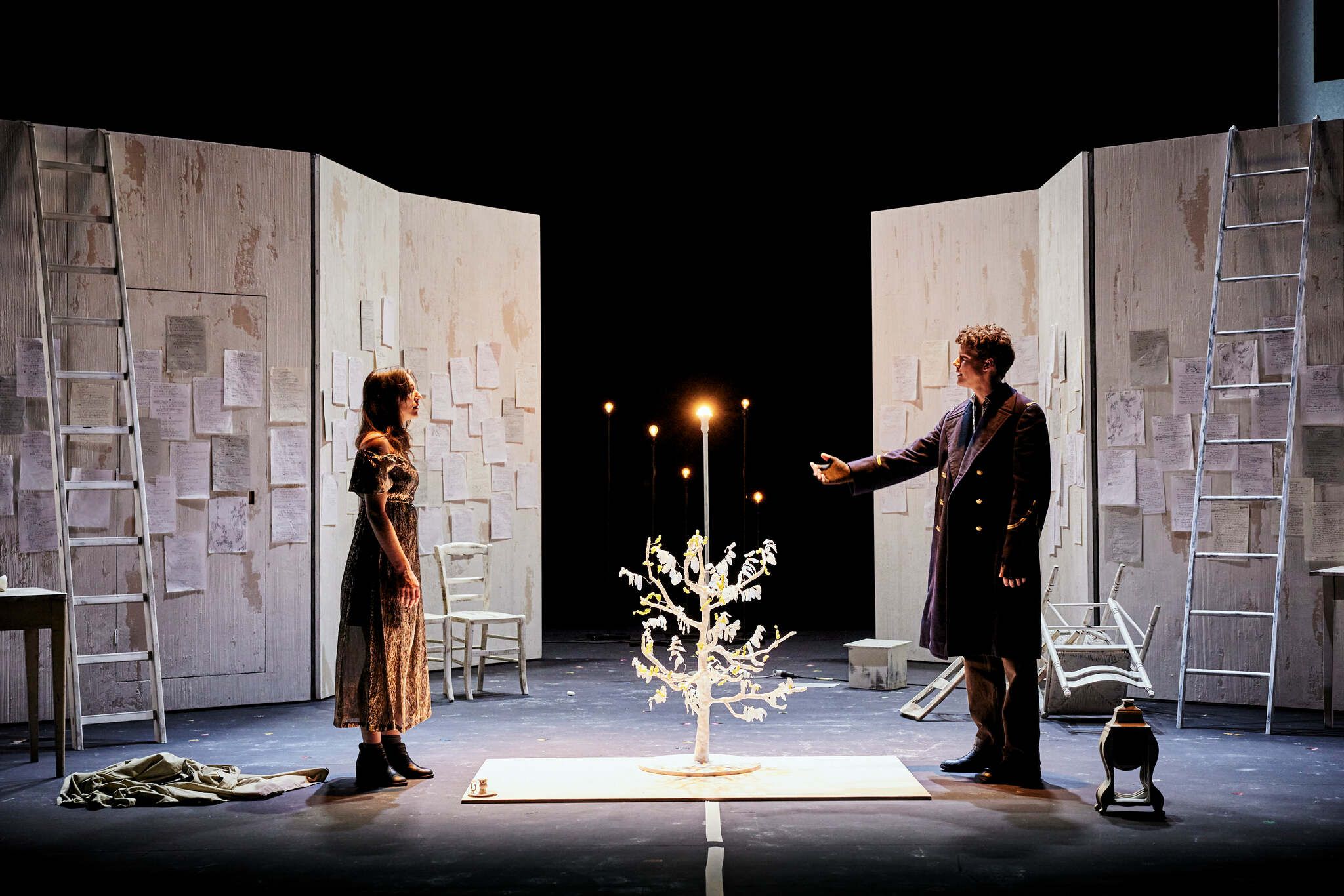 Midnight strikes and the charm will soon dissipate. The Fabrica audience, standing, multiplies applause both to salute the performance of the actors and to try to prolong the enchantment of the hours that have just passed. A waking dream from which no one really wants to escape to rediscover the noisy effervescence of the City of the Popes.

The festival is fond of these long crossings – Olivier Py is also offering another ten-hour crossing these days, with My exalted youth – and thus allows Simon Falguières to conclude a work of several years. We let ourselves be amazed by this lush universe springing from a still young spirit nourished by multiple influences, whose tutelary figures, Shakespeare, Homer and Sophocles, make an appearance here thanks to a stopover in limbo.

Seven songs, composed in an inhabited language, embark the spectators on a fabulous epic of three decades. A river-plot where two worlds in decline, such as “two halves of an apple”, must come together to save each other. Hope lies in the destiny of two children: Gabriel, a newborn baby abandoned by his parents fleeing the war, and Princess Anne, daughter of the rulers of the kingdom of tales. The journey that will lead these two souls to each other will obviously be strewn with pitfalls.

As a formidable storyteller, Simon Falguières keeps the viewer spellbound with total control of time dilation. It heightens the tension during the irruption of the disturbing Monsieur Badile (the devil himself, we will learn later, impeccable Mathias Zakhar) at Gabriel’s parents’ house, or in a forest populated by shadows escaping from the insurrection. At another time, we let ourselves be won over by the peaceful rolling of the sea where Princess Anne has embarked, assisted by a female crew who invents stories to deceive the boredom of the trip.

On the horizon awaits her the other world, which she will reach after a striking face-to-face with the devil. It is one of the many climaxes of these thirteen hours of spectacle which sail, in an uninterrupted breath, from suspense, skilfully hatched at the end of each episode, to dramatic emotions (the dead, inevitably, punctuate the course) while passing by a cheerfully distilled humor throughout the play.

Around the heroes (Pia Lagrange and Lorenzo Lefebvre, both perfectly romantic), gravitates a crowd of astonishing and terribly endearing characters: Sarah, the narrator (sparkling Camille Constantin Da Silva), Brock, Gabriel’s unloved brother determined to a Faustian pact (Charlie Fabert, dark as one could wish), Jean and Julie, forced to abandon their son (Stanislas Perrin and Manon Rey), the former president converted into a fortune-teller (Charly Fournier)… A magnificent cast whose talent seems heightened by the strength of this rich group of hours shared on stage and long before, on the path to creation.

Driven by a common fire, the 17 actors juggle roles, sometimes mirrored, from one world to another. The thundering melancholy John Arnold, dean of this young troupe, embodies both the king of fairy tales and Argan, head of the Théâtre des Campagnes, Gabriel’s adopted father. While modern civilization seems reduced to ashes, he decides to oppose the misfortune with the theater, as the ultimate bulwark of resistance.

Away from today’s world

This is also the choice made by Simon Falguières by deploying this dreamlike fresco, resolutely away from the torments of today’s world. With The Nest of Ashes, the young director offers a declaration of love, with which the spectator readily associates himself, with a thousand-year-old theatre. The acting of the actors, the breath of the verb and an artisanal decor – here no videos or other state-of-the-art technologies, we thank him for that – are enough to embark the public in the novel.

The proscenium becomes the edge of a cliff when a few nightlights reveal a dark forest and a white fabric, the foam of the seas. A few light poles will outline the authoritarian architecture of the new town and the candles, the timeless circle of the theatre. An inextinguishable and magical flame.

“I was born in a theater in Normandy”, willingly says Simon Falguières, who was born in 1988 from a mother who was a French teacher and a father, Jacques Falguières, director for thirty years at the head of the Évreux-Louviers national scene.

At 25, after taking his first steps in artistic squats, he is received in the free class of the Cours Florent in Paris. There he met most of the actors present in The Nest of Ashes and begins to write this epic (1).

For seven years, until this culmination at the Festival d’Avignon, the artists met every summer to give life to this river show, of which a six-hour version had already been created in 2019 at the Théâtre du Nord, in Lille.

“The Supplications”, chilling dive into the letters of Jews in Vichy

Global warming: the earth will cry

Global warming: the earth will cry