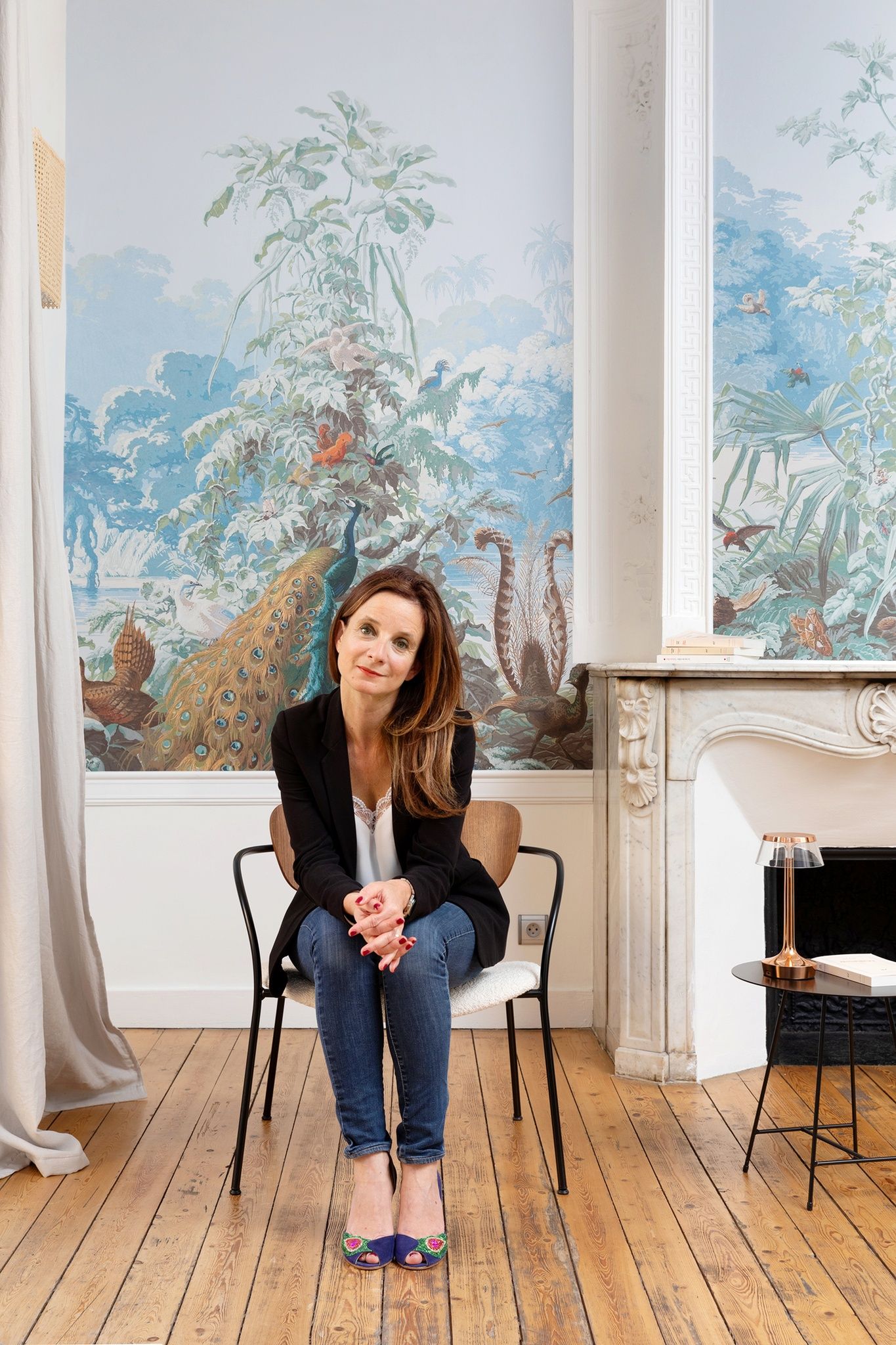 Flowers, birds, foliage and colors dance on Vanessa Hahusseau’s elegant papers. Italian and Japanese landscapes, scenes of Inca or ancient civilizations, forests of jasmine or Eden, flowerbeds of hollyhocks, gardens of the Far East or daydreams of Pondicherry… These universes are hers but, she specifies it from the outset, she is not the creator. Vanessa Hahusseau is a historical wallpaper restorer. “I always start from old models of French wallpaper, I stay on this thread of reissue”, explains this woman well in her time, as an artisan of the rebirth of an unknown and almost forgotten heritage. His vocation was revealed after studying political science and a first professional life in communication in Paris, then in Bordeaux.

A pronounced taste for decoration led her to train in graphic design and to create, in 2012, her first company, Le Grand Cirque, for which she designs practical wall coverings for current interiors (splashbacks, papers, etc.). An inclination for literature – with a mother who was a literature teacher who regularly changed the wallpaper at home – and an interest in art and decoration worked underground until these beginnings.

But the real shift comes a little later: one day in 2016, while visiting the “Spectacular Second Empire” exhibition at the Musée d’Orsay in Paris, Vanessa falls in awe before The Garden of Armidean 1854 panorama overflowing with lush vegetation and floral hangings. « You could believe it was a painting. This made me curious about what else France had done in this area. » She then discovered the reserves of the Museum of Decorative Arts, and decided “to show the general public all these marvels”. The Le Grand Siècle (1) brand was born two years later, after research and creation to put together its first catalog, rich in collaborations with museums and institutions such as the BnF.

In fashion, wallpaper? After the strong popular enthusiasm of the 1960s and 1970s, the French rejected it, preferring painting. They have been coming back to him for a few years now, with the notable progress of non-woven (2), which has discarded wallpapering tables and tedious length sizing sessions. Today, Vanessa’s clientele is made up of 70% architects and decorators and one-third private individuals. From the latter also sometimes come requests for the restoration of papers discovered in family homes.

Vanessa Hahusseau, who also travels to the United States to make her brand known there and to respond to the important requests of American audiences for French panoramics, is today restoring a very delicate old wallpaper from the Hôtel de la marine showing sparrows flowers on bouquets of purple flowers. His attention is primarily focused on colors. “It’s what gives modernity, what the eye retains best, almost more than the drawings. »

After a complete digitization of the original drawings, she enhances the colors, cleans the backgrounds, reconstructs the damaged patterns. Each restoration can require several hundred hours of work. “I don’t invent anything, I highlight and make thepaper compatible with today’s interior, with great respect for the original pattern. » For example, she refreshed and declined in several shades the medallions of George Sand’s “blue room” in Nohant. The writer extolled its soothing virtues in her notebooks: “I’m upholstered in soft blue dotted with white medallions where little mythological characters dance (…) I will only have sweet and stupid ideas there. »

It was reading a book by historian Michelle Perrot on Nohant, received as a gift from a friend, that triggered Vanessa Hahusseau’s recent project for a collection of wallpapers from writers’ houses, in which are those of the house of George Sand. “This book made me want to go on vacation in Berry with my sister to discover Nohant, she says. And reading Michelle Perrot gave real depth to the project. George Sand loved his wallpapers and talked about them with passion! »

A taste for history is behind each creation of the Grand Siècle (which, despite its name, currently only offers papers from the 18e and XIXe centuries). Evidenced by the many anecdotes unearthed by the restorer, who bring to life together the inhabitants of the houses and the papers that have seen them evolve. “I like the historical and personal universe that opens up as soon as one is interested in a wallpaper, the authenticity that emerges from these experiences. »

This is how Vanessa Hahusseau justifies her choice to re-edit the panorama of the Japanese cranes and that of the plum blossoms from George Sand’s house: “After the writer’s death, her room became that of her granddaughter Gabrielle, an admirer of the Orient influenced by Japanese fashion, who decided to decorate it with this paper around 1893.” It was covered eight times afterwards, before the Center des Monuments Nationaux found the pastel softness of the original fresco.

“I like the theatrical dimension of the wallpaper, the “wow” effect you can feel when looking at it, says Vanessa Hahusseau. I also want to make smart proposals, so that the client doesn’t just buy a piece of paper, but also the depth of a story. When looking to decorate your home, the priority is that it is beautiful, of course, and there are magnificent wall coverings in all brands. But I like that beyond the aesthetics, the public can be seduced by the fact that such a panoramic dates from 1823 and was created in such a factory, whether it accompanied Empress Eugénie or Marie-Antoinette, that it was described by Balzac… That there is a richness beyond the product. In this, the George Sand collection is emblematic because it comes from real life. »