In Paris, Jean-Luc Mélenchon galvanizes his troops and feels the second round “within reach” 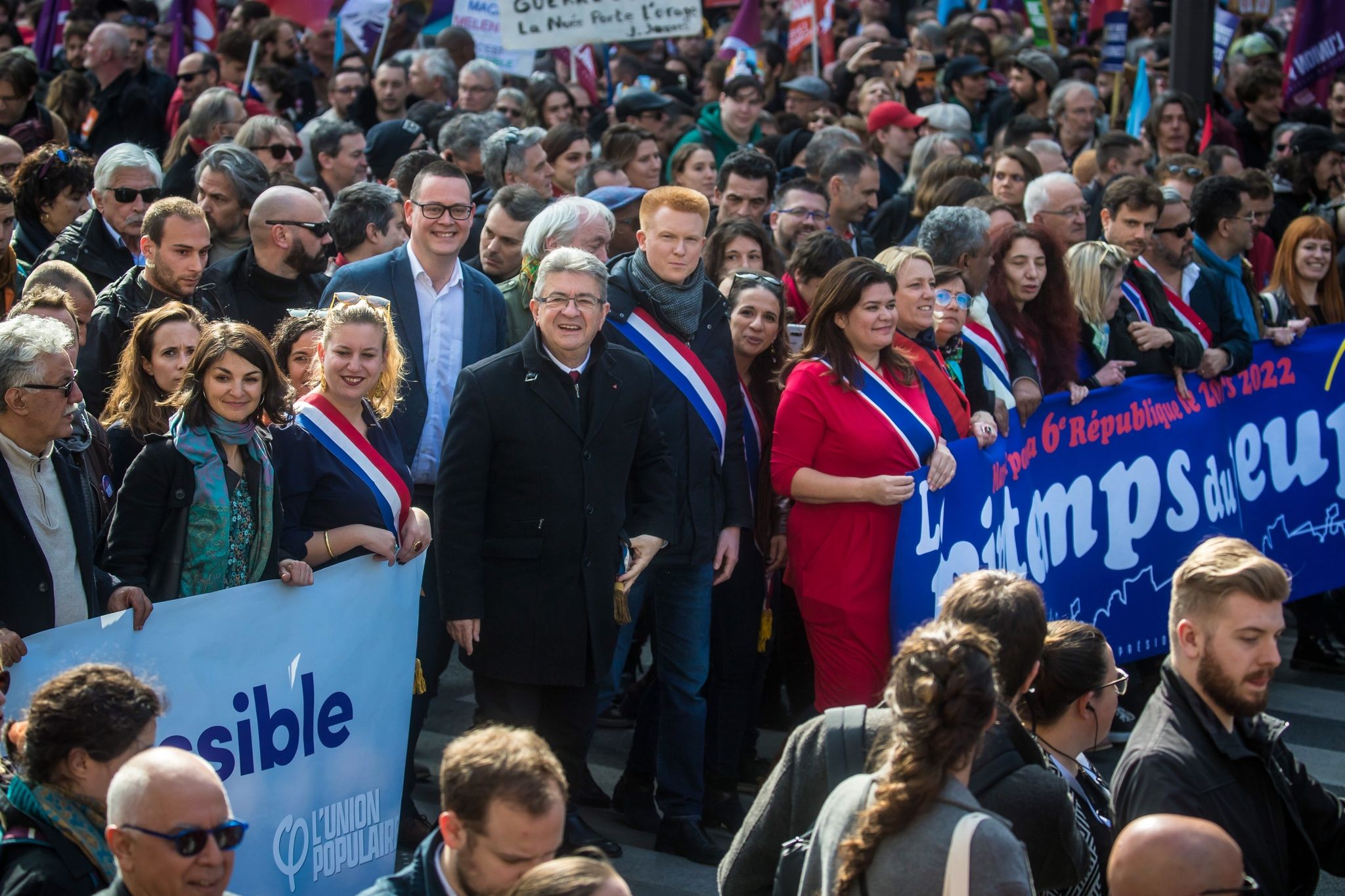 Jean-Luc Mélenchon is toying with the idea of ​​reaching the second round of the presidential election. While he is announced at 13.5% of the voting intentions in the latest polls (1) three weeks before the first round, his “march for the Sixth Republic” brought together more than 100,000 people in Paris this Sunday, according to the figures communicated by the organizers.

Before the procession of La France insoumise officially set off at 2 p.m. from the Place de la Bastille, another convoy did not go unnoticed. An alley of buses from the four corners of France. Supporters of the candidate of La France insoumise made the trip from Rennes, Bordeaux, Marseille, and even Brussels. By massively converging his support towards the capital, Jean-Luc Mélenchon intends to pose as the candidate of the “effective voting” to the left. This desire for union, the militants of La France insoumise echo it throughout this sunny afternoon. On Boulevard Beaumarchais, a small band of Bretons calls out to a couple perched on the terrace on the top floor of a bourgeois building. “Come down, join us! »

At the back of the procession, a giant tortoise, the totem animal of the Unsubmissive candidate, is trying to make its way through. “Jean-Luc, are you inside?” », joke his supporters. Massimo, from Verdun (Meuse), hopes that his favorite will be elected to act on purchasing power. “I have been retired for twelve years and my pension has not changed one millimeter”blows this former telecommunications engineer.

Yellow vest on the shoulders, Mohand nods: “I was sur roundabouts for months and nothing has changed. » This resident of Seine-Saint-Denis, now registered with the RSA, says his disgust with politics as much as the hope that surrounds this third candidacy of Jean-Luc Mélenchon: “In 2017, I abstained, telling myself that they were all rotten. But at La France insoumise, they really defend the workers. »

From the left party to the popular union, third campaign

Shortly after 2 p.m., a clamor rang out. Jean-Luc Mélenchon splits the crowd of his supporters who have only one refrain in mind: “We will win, we will win! » The leader of La France insoumise slowly progresses towards his campaign team, his fist raised. On his way, Jean-Luc Mélenchon crosses multiple regional flags, that of Ukraine, but also three banners with special symbolism. That of the Left Party, memory of his first candidacy in 2012, that of La France insoumise in 2017 where he had failed at the gates of the second round, with 19.6% of the vote, and that of the Popular Union, chosen for 2022 The graphic charter has evolved. The candidate too.

But for Cécile Coti, an unsuccessful candidate in the 2017 legislative elections in her constituency of Gironde, the former socialist’s commitment to social justice “never changed”. “We don’t need to attack our opponents basely, because we have a solid and coherent programme. When Macron makes retirement at 65 his first measure, while we propose to lower it to 60, the choice of society is clear”believes this mother from Arcachon.

Upon his arrival at Place de la République, Jean-Luc Mélenchon reaffirmed his desire to make this election “a social referendum” for or against “widespread social abuse” embodied, according to him, Emmanuel Macron. In his stentorian voice, the tribune calls for the birth of a “new world”. His first words go to the Ukrainian people: “I dedicate the popular gathering in Republic Square to the resistance of the Ukrainian people against the Russian invasion. »declares the Rebellious candidate, thus refuting the allegations of Yannick Jadot and Anne Hidalgo who accuse him of complacency with regard to Vladimir Poutine, in particular because of his position of “non-aligned”.

→ EXPLANATION. Presidential 2022: why some candidates look to Russia

Galvanized by the cheers of his supporters, Jean-Luc Mélenchon summons them to assume “their moral responsibility to open the door to the second round”. A message intended to federate the abstainers and the undecided on which the candidate counts to double Marine Le Pen in the last straight line.

Coming from Lille with a friend, Julie, 19, will take part in the ballot for the first time. This first-year law student is captivated by this gathering: “I had never been in any political meeting, nor in any demonstration but I do not see who other than Jean-Luc Mélenchon is able to bring together so many people. » Conquered, the young woman will attend the meeting with hologram, in Lille, on April 5th.

In the Mediterranean, countries facing a historic drought

Who are the members of the Generosity Coalition?

Who are the members of the Generosity Coalition?