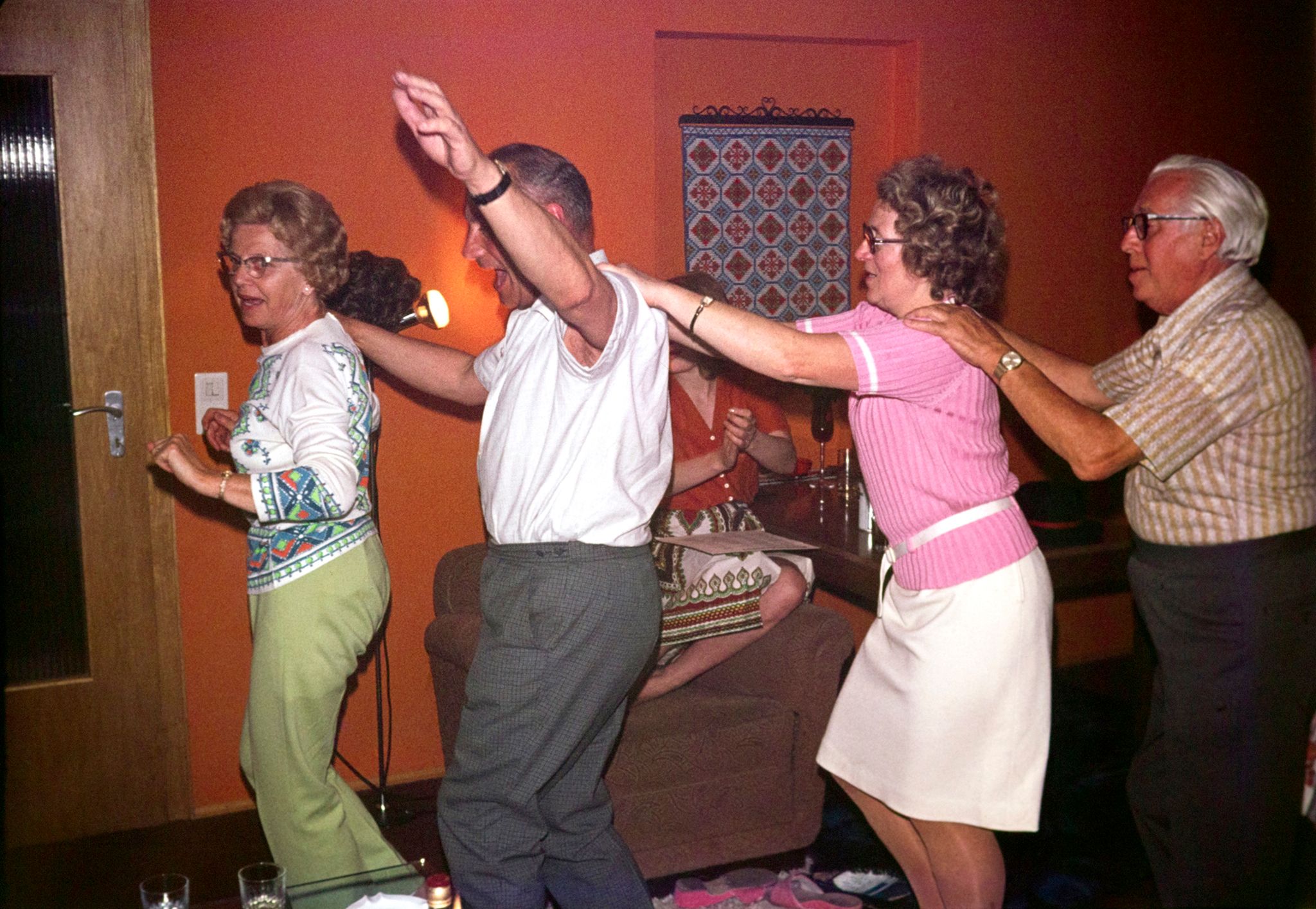 Our end-of-year celebrations risk once again being placed under the sign of prudence and distance, another reason not to shy away from our pleasure to find on the walls of the Quadrilatère in Beauvais, the party in all its forms and formats: village festival, fairground, popular, religious or family. Weddings, carnivals, festivals and Saturday night fevers are exhibited in black and white and color, in still and moving images, in the art center next to the cathedral.

We enter the cavalcade following the chariots of Parade, by Tom Janssen. The photographer followed the many processions – there are more than 500 per year in the Netherlands – which animate the towns and villages of his country. Suddenly, giant squids, a flock of gigantic geese, an airplane cabin or a ghost ship appear at the bend of a street, a surreal appearance breaking the monotony of the landscape.

On the contrary, it is in a whirlwind of merry-go-rounds and vibrant colors that one of the French pioneers of color photography, John Batho, takes us along. For three years, from 1981 to 1983, he photographed in the spring, against a background of an azure sky, a certain merry-go-round at the Foire du Trône at the time when it was best lit. Thanks to an adapted exposure time, making it possible both to render the movement and to keep the precision of the background, the viewer is caught by the sensation of vertigo in a joyful whirlwind of pop and tangy colors.

Other warm colors, those of the Kodachrome slides, made the heyday of amateur photography in the second half of the 20th century.e century, which invite us to share the festive and family memories of others than us. In a playful staging reproducing a living room from the 1960s, the tender, moving or funny images of the collaborative background The Anonymous Project could come out of our photo albums: would it not be Uncle Bernard asleep in his armchair with a pointy hat on your head? With this project, filmmaker Lee Shulman has been collecting slides of everyday life since 2017, preserving this collective memory from oblivion. The background is contributed by anonymous people from all over the world but most of the images were taken between the early 1950s and the late 1970s in the United States, where the practice of family photography was highly developed.

This same spontaneity is found in Nick Waplington’s series, Wedding, Parties, Anything. During the Thatcher years, the British photographer forged close relationships with working class families on a town hall in Nottingham, central England. Centered on the new marriage of one of the mothers, the series plunges us into the heart of the lively and colorful, warm and disorderly intimacy of this united group.

Any other atmosphere with the series Night Game, by Belgian photographer Nick Hannes. Taken in the fashionable nightclubs of Ibiza, Dubai or Monaco, paradises of the entertainment industry, these frontal photos are bitingly ironic. In this society of appearance, the theatrical posture aimed at social networks prevails: young silicone women pose for selfies, others bathe in oversized glasses of champagne under the flashes of mobile phones. Behind this excess that is ultimately very framed and dearly priced, there is a certain feeling of loneliness that cannot be masked by this overflow of flashy luxury.

Day dawned on La Nuit, a nightclub in Montbazens, in Aveyron, revealing its facade with Aztec caryatids flanked by palm trees. Since 2011, François Prost has been photographing, in the early hours of the morning, the facades of nightclubs in small seaside towns, in peri-urban or rural areas. Neons extinguished, Le Macumba, Le Niagara, L’Acropole or Le Sphinx look less proud in the middle of the beet field or at the edge of the departmental road. Not without humor, and with a hint of nostalgia, the series pays homage to these fantasized places of our adolescence.