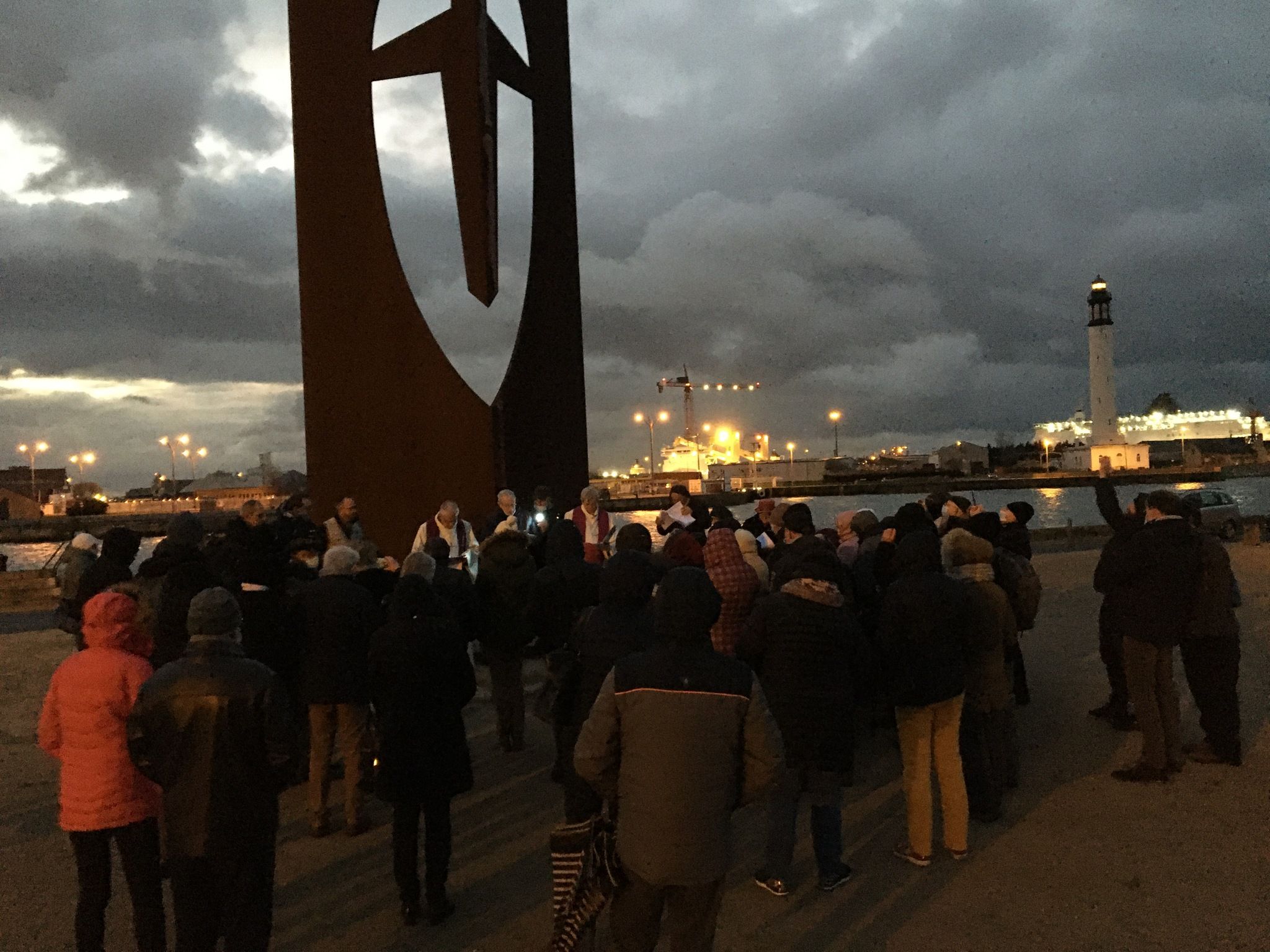 “Death has struck again at the border. At least 27 people who saw their hopes soar in the icy water of the English Channel … “Readers take turns taking the floor, members of the pastoral care of migrants, of Secours Catholique, of the death group, to pay tribute to the migrants who left Dunkirk at the beginning of the week and tragically died at sea.

Despite the cold and rainy weather, Friday November 26, around fifty people were present at the end of the afternoon: volunteers from associations, the pastoral care of migrants, parishioners, priests from Dunkirk and representatives of the two neighboring dioceses, perhaps non-believing inhabitants or other religions… Young and old, like Father André Delepoulle, 100 years old, a figure of the Church well known to Christians in Maritime Flanders.

“You are of the house of God”

Impossible to warm up around this ordeal at the end of the quay, inaugurated two years ago and which symbolizes a boat inscribed in a book, with a sailor in the shape of a cross at its heart; on its base, this inscription: “In hope we have all been saved” (St.Paul).

Candles are lit one by one for each of the victims of exile, frail lights in the already fallen night. Strong texts follow one another: very short passages from the Gospel – “You are no longer strangers or people passing through, you are of the house of God” (Ephesians 2,19) and “Whoever welcomes a child like this in my name, he welcomes me” (Mark 9.37) -; two testimonies of exiles taken from the Jungles newspaper; an extract from the press release of the death group, which brings together voluntary workers and citizen activists, recalling that “more than 336 people have died on the Franco-British border since 1999, including 36 in 2021.”

“Wake us up from our sleep of indifference!” “

The prayer time ends with a text written by the Jesuit priest Maurice Joyeux and delivered on the island of Lesbos (Greece) on April 16, 2016: « […] Merciful God, Father of all men, wake us up from our sleep of indifference! Open our eyes to their suffering and free us from insensitivity… ”

Under the north wind mixed with rain, between hail and snow, the albs and the stoles do not hold in place, a person protects the enclosure with a plastic bag. Sad time for a sad moment but marked by a united communion around these exiles who perished at sea at the beginning of the week.

“How not to be heartbroken?” “

The auxiliary bishop, Mgr Antoine Hérouard, reread the press release published by the four bishops of the northern province: “Once again, children, women and men, who left everything in search of a better world, have been crushed by the sea. How can we not mourn them? How not to be heartbroken? “

Shipwreck of migrants in the Channel: the bishops of northern France express their indignation

Bishop Ulrich quotes an extract from the encyclical All Brothers : “When the neighbor is a migrant, complex challenges are intertwined. Of course, the ideal would be to avoid unnecessary migration and to achieve this, it would be necessary to create in the countries of origin the effective possibility of living and growing up in dignity. […] But when noticeable progress in this direction is lacking, we must respect the right of every human being to find a place where he can not only meet his basic needs and those of his family, but also fully fulfill himself as a person. Our efforts vis-à-vis arriving migrants can be summed up in four verbs: welcome, protect, promote and integrate… ”

“I needed to ask myself in front of this drama”

After the Our Father broadcast in Aramaic, then repeated by everyone in French, Bishop Ulrich pronounces these few words before the blessing: “May our deceased brothers at sea find rest …”

José, a member of the Evangelical Protestant community, came to pay homage to the victims, who regularly distributes food to migrants in Grande-Synthe, and for “To make ecclesial and human communion, to be united in the Church. “” It was obvious for me to come, since I was available, says Anne, who lives in Coudekerque-Branche, just next to Dunkirk. I needed to face this tragedy which touched our brothers in humanity, people who deserved to live like everyone else and whose path has tragically stopped. “

Quickly, the participants disperse in the freezing cold. A cold which, during a short moment of prayer, sent everyone back to the meteorological conditions that the exiles present on the coast now face on a daily basis.