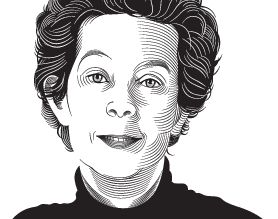 A paragraph by Alexandre Vialatte has the effect of an exceptional wine on me. Let me soak my lips in it, I must take more. And even. And come back to it. The wolf that I met the other day at Angers station having made me reopen my Vialatte, here I am overtaken by my addiction. Instead of prescribing a methadone substitute for unfortunate heroin addicts, they should be made to read Vialatte. It is a very powerful drug, which puts in the euphoria but does not pay any side effects – if not addiction.

It turned out well, moreover, my submersion by Vialatte. Because I had remorse since my post on the Angevin wolf. Canis lupus haunts many chronicles of Vialatte; corn The cross grants its chroniclers only two small pages, and I had to leave aside 90% of the lines that I would have liked to be able to quote. I hope and believe that I will be forgiven (because there are thousands of us who cannot do without our regular dose of Vialatte) when we have read a little more of these lupine lines. Thus this extract from the “Chronicle of the death of the wolf” (1). Vigny, Vialatte recalls, admired the wolf. “He gave him as an example to man. The wolf, he said, “suffers and dies without speaking,” and man, in his opinion, should do the same. He did not think that it is much more difficult (and yet it happens that the man does it too; especially if he passes under a very fast train; like the Blue Train, or the express of Nice; or it falls into a vat full of molten iron); instead that the wolf cannot say anything even when he dies or when he is in pain. We’ve never seen a talking wolf. It is not to the wolf that we owe itFuneral oration of Turenne, nor the Discourse on Method, which is the most learned speech in the world, nor Pierre Dac’s monologues. While man has had Bossuet, Jaurès, Mirabeau, Massillon. The wolf can suffer without speaking, but man can speak without suffering. Let us give back to each one what is due to him. “

Everything Vialatte is there. A crazy fantasy doubling an unfailing rigor, a crazy logic expressed in an impeccable language, an erudition as vast as farce, a humor rarely achieved in French literature, of which it is not the strong.

When a conjurer wows crowds by popping emerald hummingbirds out of his ear, one wonders how he pulls off this trick. We are looking for the secrets of his power. The prose of Vialatte deserves to be questioned in the same way. It is in her chronicles that she achieved all her grace, in these hundreds of butterflies sent to the NRF, to the World show, To Marie Claire, to Monitor, To The mountain, above all, and grouped today in volumes.

If the reading of these chronicles plunges into a very special rapture, it is because their author crosses a weft and a thread whose conjugation is miraculous. He makes extravagance dance on the simplest thread possible.

His imagination goes beyond all limits. It’s not that she’s crazy, she’s crazy. Wolf, always him, he writes “(…) His kidneys are full of snakes which make his bite extremely poisonous; so that one can die of being eaten by a wolf. “ (2)

But this boundless fantasy is carried by a Jansenist syntax. Short sentences. Most often an independent clause, subject, verb, complement. Elementary, the verb (this is one of the secrets). The wolf always: “Wars attract him. If there is no more war he will preferably eat a young lackey. Sometimes a fat child or a serious young girl. “ (2). Here and there a subordinate, but then the most common, a relative of base, brought by a who or a where, a comparative in like.

From this conjunction of extremes is born humor, this son of the paradox and the improbable. “(…) No animal is more affectionate than the wolf, more domestic, more hungry for salad and hungry for Christian virtues: a family which raised one around the Arctic Circle, fed it radishes and milk and it participated to evening prayer. “ (3)

Especially poetry is born, this daughter of the incongruous and of grace. “The posthumous wolf is found in the companionway, which is, so to speak, a soulless wolf. When the soul of the wolf runs after its fur, for which it retains the nostalgia, it enters the skin of a man; he grabs his bed cover, throws it on his head with great chills, and runs at midnight under the moon to extremely desolate places. It’s called a werewolf. “ (3)

Why do vaccines need to be hospitalized?