Jerusalem shooting raises fears of a return to violence 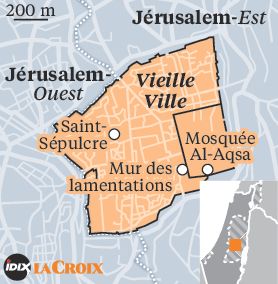 It took only 32 seconds for the Israeli security forces to intervene and kill the shooter. On Sunday, November 21, at 9 a.m., gunshots rang out in a street near the Mosque Plaza in the Old City of Jerusalem. Fadi Abu Shkeydem, a 42-year-old Muslim preacher, opened fire on passers-by with an automatic weapon. A fatal half-minute for Eliyahu Kay, 25, a guide at the Wailing Wall, who, very attached to Israel, had left his native South Africa to settle there. Four other people were injured, one of them seriously.

A resident of Shouafat, a Palestinian refugee camp transformed into a poor neighborhood in northern Jerusalem, he was quickly recognized by Hamas as one of the local leaders of its political branch. Israeli police searched the apartment of the shooter’s family from top to bottom. At nightfall, two spontaneous demonstrations were set in motion, one in the Old City and the other in Shouafat. “Death to the Arabs! We will burn Shouafat! “, we heard in the first, while in the second procession, adorned with flags of the Islamic movement, the demonstrators proclaimed: “Millions of martyrs are heading for Jerusalem! “

As the city has barely reopened to tourism, the shooting has awakened painful memories of the Intifada. This is the second Hamas-linked attack in Jerusalem in less than a week. On November 17, a 16-year-old Palestinian boy stabbed two Israeli policemen before being shot dead.

What are Hamas’s intentions? Sovereign in Gaza, he has obtained important steps to ease the Israeli blockade in recent days. But in the West Bank, it is weakened, taken to task by a Palestinian Authority on the defensive: last week, weapons almost spoke between the two groups in the Jenin refugee camp. In this context, the threat of a return to violence in Jerusalem could be useful to Hamas from a strategic point of view.

In the aftermath of this attack, the Jewish state resumed its usual activities. Monday, November 22, a key figure in the trial against Benjamin Netanyahu in a corruption case testified at the bar, while the anti-Covid vaccination of the youngest began. Among Palestinians, on the other hand, conflict is part of a daily and brutal reality. At least 20 of them were arrested overnight from Sunday to Monday, including the Palestinian governor of Jerusalem, Adnan Gheith. Settler attacks are becoming increasingly violent and more frequent, according to a new report from the Israeli NGO B’tselem.

In Jerusalem, expulsions of Palestinians from the East Jerusalem neighborhood of Sheikh Jarrah, which ignited the powder in May, remain relevant, as do in the Palestinian neighborhood of Silwan, across the Old City. . The growing influx of Jews on the Esplanade des Mosques and the generalization of Jewish prayer in this highly sensitive place are putting the fragile status quo between Jews and Muslims to the test. Fadi Abu Shkeydem was also known in Jerusalem for leading strident demonstrations against what the Palestinians call “the assault on Al-Aqsa” (from the name of the mosque, Editor’s note).