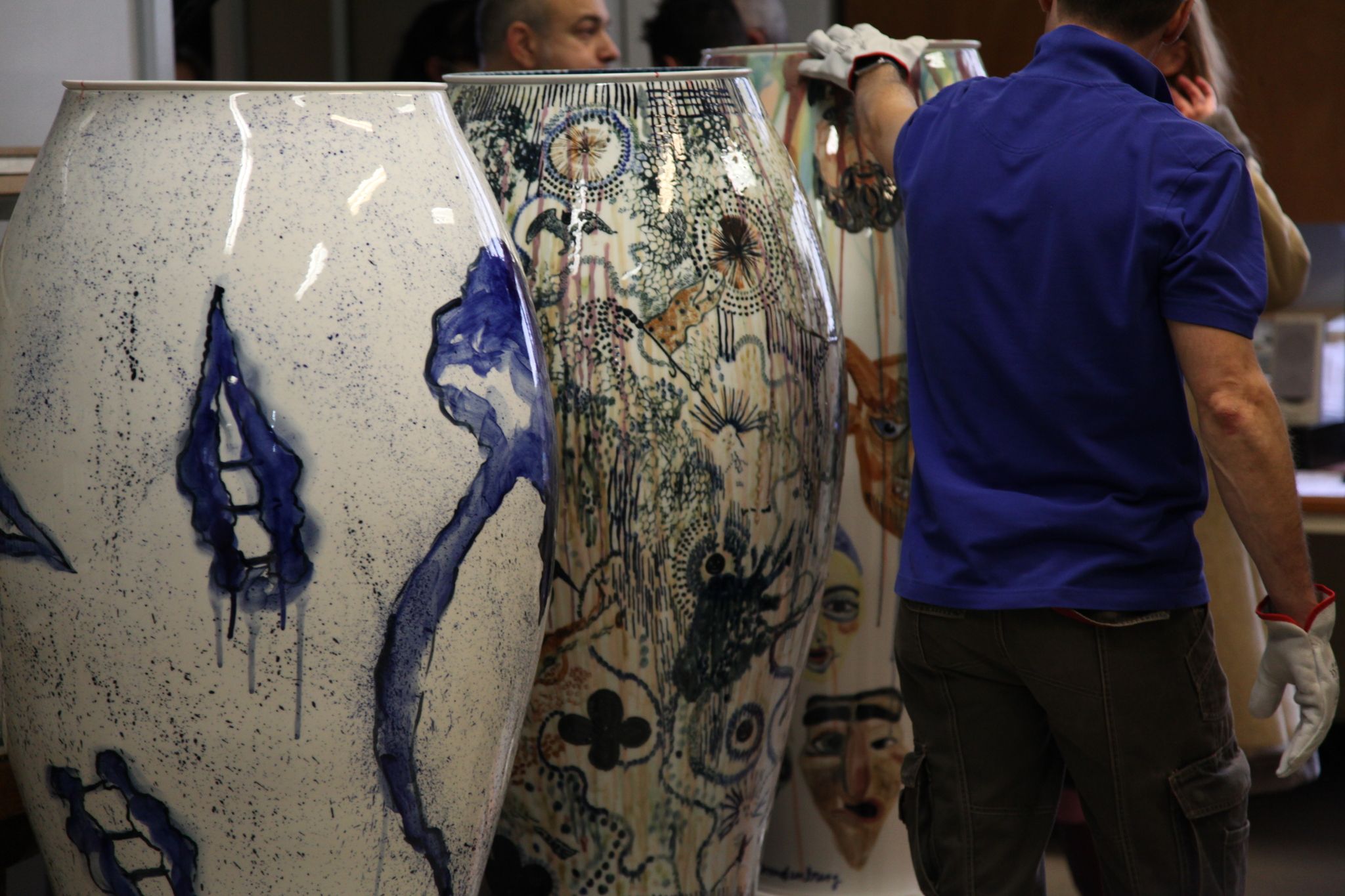 On this November day, the emotion is palpable around the wood-fired oven of the Manufacture de Sèvres. This monumental brick tower surrounded by metal, classified as a historic monument, only ignites every five years, to cook exceptional pieces in the “great fire”. Annette Messager, Hélène Delprat and Ulla von Brandenburg observe their productions, released one by one, with a thousand precautions. Each has decorated a dozen emblematic vases of the manufacture, part of the long tradition established between Sèvres and artists since the 18th century.e century.

As often in the arts of fire, cooking (over thirty-three hours!) Holds surprises. The disappointments are fortunately minimal and some pieces of overwhelming beauty, such as this vase over a meter high painted by Annette Messager, where two blue skeletons face each other lovingly above the inscription. “Work”. This decor, completed in the spring, takes on a particular resonance with the death in July of his companion Christian Boltanski. “I have transposed, using a video projector, the vanities that I have drawn since an illness made me realize my vulnerability in 2019”, specifies the plastic artist modestly.

Sèvres’s invitation was for her a stimulating but destabilizing adventure: “We are very well supported by craftsmen of excellence but they themselves do not always know what the outcome will be. When we apply the enamels, we do not see the colors as they will appear after firing. And there is no repentance possible. It is a wandering, ghostly and mysterious. At the same time, I like that a part of awkwardness, of childhood remains in my drawings. “

If Annette Messager is not sure if she wants to repeat the experience, Hélène Delprat and Ulla von Brandenburg, whose creations take marvelously advantage of the vast palette of Sèvres colors, are in a hurry: to put their hands back to work. paste and this time design their own shapes. In “Filibuster”, Hélène Delprat would like “To abuse the tradition again”, as when she made tiny holes with a drill in her vases under the dumbfounded gaze of the decorators.

Is ceramics in fashion? In recent decades, many artists, such as Laure Prouvost, Miquel Barceló or Grayson Perry, have seized upon this medium formerly reserved for specialized craftsmen. “There is a return to materiality, a desire to reconnect with an ancestral, visceral practice, as an antidote to the virtualization of relationships and objects”, notes Anne Dressen, curator of the exhibition “Flames, the age of ceramics” at the Museum of Modern Art in Paris.

Elsa Sahal, trained in Fine Arts by the great modeler Georges Jeanclos, has made it her favorite material, declined in sensual and suggestive sculptures, willingly provocative. “The earth is like the human body, organic, fragile and full of water”, she emphasizes, fascinated by “The infinite possibility of polychromy, of textural effects of this material which can imitate others, from the dirtiest to the most refined, while remaining very economical”.

Renaissance of Arts and Crafts

Art historian Anne Dressen sees in this practice, which is also exploding among amateurs, a desire to return to “More reasoned productions that respect the environment”. The young generation allows themselves more easily to cross the border between sculpture and utilitarian object, in a kind of rebirth of the Arts and Crafts movement, a century and a half after this English movement: “There is the same will to decelerate, to militate almost politically in favor of artisanal forms, know-how and the involvement of the artist, independently of the machines. “

Like Sonia Delaunay or the artists of the Bauhaus, Ulla von Brandenburg would see himself breaking down the partition between major arts and applied arts, to re-enchant everyday life. She, who has already created chair cushion rugs, with a traditional Japanese weaving school via the design studio We do not work alone, dreams of creating tableware. “ How frustrating to think that Sèvres vases, intended for museums and wealthy collectors, will never contain flowers! »

A batch of exhibitions

“Flames, the age of ceramics”, until February 6 at the Museum of Modern Art in Paris. Rens. : 01.53.67.40.00, mam.paris.fr. A vast panorama through 350 works from the Neolithic era, accompanied by clear explanations of the techniques.

« Tale of the 11th Day » at the Galerie de Sèvres, 4 place André-Malraux, Paris 1is. On eleven sumptuous vases inspired by Boccaccio’s Decameron, the Chinese Yang Jiechang, guest of the Manufacture, revisits the paste-on-paste technique which threatened to fade into oblivion. The 2021 batch of the “big fire” will be on display in early 2022.

Uber, Deliveroo… The government must stop playing the platform game